Mockingjay -- Part 1 (a movie review (without the book) post) 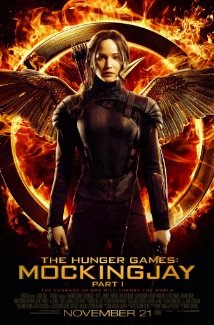 So here we are at the third movie, and I'm still not reading the books. Which is not to say that I'm not enjoying the movies, I am. (Well, not the first one so much, but these last two have been quite good.) However, from what I've heard about the books, the reason I like the movies is because the focus has shifted from the love story to the politics, and it's the politics that I find interesting. Honestly, I don't care much for Peeta (who is like a puppy in a perpetual rain storm, all big eyes and whimpers) or Gale (with his constant angst about how Katniss likes Peeta better (and I would like Peeta better, too, if I had to deal with that, right up until I had to deal with Peeta)) and would have a difficult time with a book that obsessed over how the character couldn't make a choice between the two of them. But that's not the movie, so let's move on...

First, let's touch on Philip Seymour Hoffman. I've been a fan of his for a long time, probably owing to The Talented Mr. Ripley, though I first really took note of him in Twister. He gave a great performance in what was an otherwise horrible movie. It was enough to make me watch for him in other films. He was an actor that you could always count on for, at least, a good performance (or a great one, as seen in Capote). I was saddened by his loss. At any rate, initially, it was stated by Lionsgate that he would be digitally recreated for the completion of Mockingjay but, as it turns out, they scrapped that idea. Probably a wise choice, but I didn't know that when I was watching the movie and sat there being amazed at what I thought they'd done. Last word, he was great, as can be expected.

Jennifer Lawrence gave a performance equal to the one she gave in Catching Fire, which is no small thing since the movie hinges on her and her ability to be outraged by the actions of the capitol. The horror that Katniss feels over things like the white roses allows the audience to be outraged along with her. She's a talented actor already; it will be interesting to see where she goes.

The other standout performance was from Elizabeth Banks. She's been superb as Effie Trinket all along, but she really surpassed herself in this one. Effie, having been pulled out of her world and thrust into one which she doesn't understand, is completely out of sorts, and Banks pulls it off flawlessly while still being true to Effie in the process. I'd probably go see these movies just for Banks' performance.

The only complaint I might have about the movie is splitting it into two parts. I've come to a place where I'd rather have one long movie than have it split up. It's not just about the fact that I feel like I'm being milked by Hollywood when they do this, but it's just jarring to have the story stop like that, mid-arc. It's like hitting pause on something and never coming back to finish it. Well, not until months later (or a year in this case). Oh, that and the quinjet that they used. I mean, those VTOL jets they use in the movie look almost identical to the quinjets. Maybe one of the Avengers left one lying around somewhere.

These are really good movies, not quite great but, still, really good. After the shaky start of the first one, they have settled into a visually appealing, solid look for the world, a look which is split between something in the probably far future and a throwback to the turn of the 20th century. Backed by solid acting, this has become a tale, really, of what it's like to live as part of the 99% supporting the 1% in what they justify as a "symbiotic" relationship. I wonder if all parasites see themselves that way.
Posted by Andrew Leon at 12:00 AM