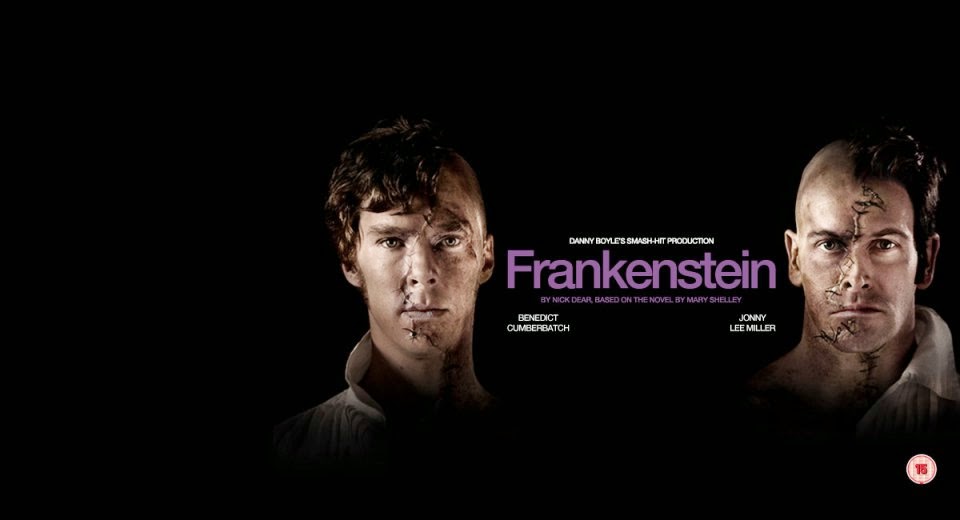 Back in 2011, Britain's National Theater put together a production of Frankenstein directed by Danny Boyle (who also directed Trainspotting, 28 Days Later..., and Slumdog Millionaire) with a new script written by Nick Dear. There were two things that set this production apart from previous iterations of Frankenstein:
1. The focus was on the creation, something that I'm not sure has been done since Mary Shelley wrote the book.
2. The production would feature two actors (Benedict Cumberbatch and Jonny Lee Miller, both of whom currently play Sherlock Holmes in separate television series) in the roles of the doctor and his creation who would switch off playing the two roles from performance to performance.

There were some clips before the "movie" started about the making of the production, and Cumberbatch talked about his method for learning how to move as the monster. He studied the movements of people who are in physical therapy to re-learn how to use their bodies after a stroke or accident. He was pretty impressive. He had this jerky, twitchy way of moving around, even after he "learned" how to move, that made it clear he wasn't quite in control of his body. Or, well, anything.

Overall, it was an excellent production; however, there were a few things I had issues with.

The play opens with the creature being "born." There's a long sequence of him learning to move his body around which culminates in the doctor coming in and freaking out to find his creation alive. He abandons the creature to the world. Then there's a long sequence of the monster discovering grass and the sun and rain and... people. People who persecute him for his ugliness. All of this is fascinating, especially Cumberbatch's depiction of the monster, BUT... It just went on for too long. The floundering around on the stage learning how to stand and walk took something like 15-20 minutes then another 15 to 20 minutes of the creature doing things like eating grass until he's finally chased away by a mob. So, while Cumberbatch's performance was impressive during this section, it was too much. His performance of the monster was impressive throughout the play and, once the play got into the story, it was good, too.

However, I was a bit underwhelmed by Jonny Lee Miller. He didn't really seem a "mad genius" or like someone playing God or anything at all like how I would think of Victor Frankenstein. Actually, he seemed much more like a kid throwing rocks through the windows of an abandoned house or pulling the legs off of a spider, doing it because he could but without much interest. I've heard that he was better as the creation, but that's just what I've heard; I can't verify that, because I didn't see that version.

I was also not impressed by the performance of George Harris (Shacklebolt in Harry Potter), who played Victor's father. He came off as rather flat to me, no real emotion in what he was acting. The people I saw it with agreed with me, but they saw the other variation of the play, also, and said he was much better as Victor's father when Cumberbatch was playing Victor. So, maybe, he was having an off night or, maybe, the synergy between Harris and Cumberbatch was better than it was with Miller.

As I said, overall it was an excellent production, and I would really like to see it from the other perspective with Cumberbatch as Victor. It looks like it might get a DVD release, so, hopefully, I will get the chance. If there happens to be a showing of this near you, I would highly recommend it, if nothing else, just for the chance to see the "live" performance.
Posted by Andrew Leon at 12:00 AM