If I'm going to be honest, I suppose I have to admit to not being a very "thankful" person. Which is not to say that I'm not thankful for things, but I'm not quite behind the expectation of thanks that we currently have culturally. Actually, I sort of think that's been, to some extent, driven by the greeting card market and the "necessity" of sending out thank you cards. It has created an expectation of thanks for things we shouldn't expect thanks for. In fact, doing things in expectation of thanks is, well, kind of wrong. At least in my mind.

And, I have to say, if you do something for me or give me something or whatever, and I tell you "thanks," there's very little chance I'm going to also send you a card telling you what I already said. Especially when what you're going to do with the card (that probably cost $4 (which would have bought a whole paperback book when I was a teenager)) is say "oh, isn't that nice" as you're dropping it into the trashcan. And, then, of course, you have to remember to tell me "thanks for the card" next time you see me. Or, I've heard, send me a card thanking me for the card. What the heck is up with that trend? Sorry, I'm just breaking that cycle and saving my $4. If the "thank you" that came out of my mouth wasn't good enough... well, I don't know what to say if it wasn't, but please don't send me a thank you card for anything I might do for you, because I don't want it, and I will drop it in the recycling bag. Just keep your $4.

This is not a ranty post, or, it's not supposed to be, anyway. This is a post to say thank you to some people that have, in the last year or so, gone above and beyond without asking or even expecting thanks when they've done those things, things that I'm thankful for, so I want to call attention to some people mostly in no special order. However, I have to start with

Briane Pagel: I don't even know where to begin when it comes to Briane. Briane is, bar none, the most supportive person of independent authors that I know of. First, he will read your book(s), but, not just that, he will also review them. And he'll do that without being asked to do it, which, you know, is just awesome, because it just gets tiring to always be begging people for reviews (especially when they take the time to email you to say "hey, I really liked this" but don't seem to have time to do that on Amazon). But not only that! He will also spontaneously put links to your stuff into his posts, his completely unrelated posts. Just as an afterthought, he will throw in, "Oh, and you should read 'Shadow Spinner: Collection 2: The Man with No Eyes (Parts 6 - 12)' because it was really good!" And you should totally read that, because Briane has a story in it, "Augurs of Distant Shadow," that is really quite excellent and something else I need to give him more thanks for. That he wrote it for me, that is. And, just by the way, Briane is so supportive of indie authors, he's willing to pay you to let him post your short stories on his site. That's a total win/win for you! So, Briane, thank you for everything over the past year.

Okay, so I lied, because this next one, also, gets special considerations above everyone else:
Rusty Webb: Theoretically, Rusty and I have a symbiotic relationship. He does covers for me, and I do editing for him. However, I always feel like I'm getting way more out of the relationship than he is. And, really, all you have to do is look at the work he's done for me to see why I feel that way. 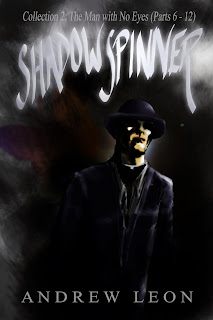 And, aside from the artwork, he also leaves reviews for things without being asked, which is just gold. All of that, and there will be a story by Rusty in "Shadow Spinner: Collection 3: The Garden (Parts 13 - 21);" you should make sure to check that one out, too, once it's available.

And, since we're on the theme of reviews and bonus stories, there's also
Bryan Pedas: Bryan (and Brandon) have been very supportive for a while, but it's Bryan who gets out there and leaves most of the reviews, and Bryan who has a story in "Shadow Spinner: Collection 1: Tiberius (Parts 1 - 5)." There just aren't enough ways to say thank you to people who both leave reviews! and write stories for you. So, just to give Bryan a plug, his book, Demetri and the Banana Flavored Rocketship, was the best book I read in 2012.

Okay, and now for some others which will pretty much just be going down the list:

Konstanz Silverbow: Thank you to Konstanz at No Thought 2 Small for the interview and supporting Shadow Spinner!

Crystal Collier for having me on her "Truth or Lie" thing, plugging Shadow Spinner, and talking to me about cheese. Although I think it might be more exceptional if she talked about something that's not cheese.

Shannon Lawrence for spontaneously posting links to things (book releases, promotions, blogfests) without being asked. There is a certain amount of joy that happens when I visit her blog and she's promoting something I'm doing when I've never mentioned it, and that's a cool thing. Not the joy, that she does that.

The women over at The Indelibles for Indie Life.

And Alex Cavanaugh for posting more links than anyone has a right to and for all of his work on the IWSG.

I think that will do me for this year. I'm sure there are probably more people I ought to thank, but, as I mentioned in my last post, my Brain refuses to remember whether I've locked the front door when I'm leaving the house, so trying to remember everyone from the last year is a bit beyond my capacity. The one other thank you I do need to give is to everyone who has read any of my stuff over the last year and doubly thank anyone else who has left a review and/or a rating anywhere. I do realize that there are a few more of you out there that have left reviews, and I really do appreciate that. This year, if I'm smart, I will make a list as things happen and I won't leave anyone out next year.

Tomorrow, I will be eating way too much, so, if you never hear from me again, there is a good chance I ate myself to death; however, that has never happened in the past, so I'm hoping it won't happen this year.
Have a Happy Thanksgiving!

Oh! And in case you missed it, yesterday, drop by Out of Print and read my new short story, "The Tea Kettle."
Posted by Andrew Leon at 10:16 PM