Some time ago, my wife referred to me as "existenially cranky." I, um, well, I couldn't argue with her. In fact, I just kind of looked at her, shrugged, and said, "Yeah, I guess so." It's hard to argue with the truth. 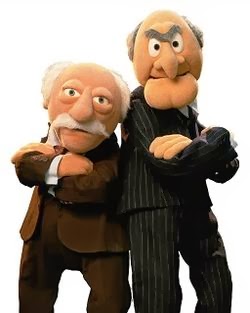 I suppose most people would take that statement as an insult, but she didn't mean it that way, and I didn't take it that way. The truth is, that is kind of how I experience existence. Not that I'm cranky, not really; it's more that I approach almost everything from a standpoint of being dissatisfied. And not really being dissatisfied, just seeing the flaws in things, which is not really about seeing the flaws but about seeing how things could be made better.

So here's a short example:
Many years ago, I worked as a youth pastor. At some event or other, one of the kids (one of the girls, actually) got in trouble for something (no, I don't remember). Her father got upset that she got in trouble and complained to the pastor and, thus, there had to be a meeting. You know, because how dare I discipline his daughter for something that was clearly unacceptable behavior. During the meeting, I explained how the behavioral expectations had been very plainly (multiple times) laid out and how she had been aware of the behavioral expectations. His response to that was to say to me something along the lines of, "Well, you can't expect teenagers to follow those kinds of rules."

This attitude, the attitude of being "special," is one of the reasons that it annoys me so much when people disobey traffic laws. Did you know that studies show that that is the #1 reason people speed and break traffic laws? It's because they feel "special." No, seriously. Studies show that people who, say, speed believe that the speed limit was established for other people, people that don't drive as well as they do (and no one drives as well as they do). Therefore, they have a special exception to not have to follow the speed limit.

The problem is that being a good driver is like having a good sense of humor: Everyone believes they have one. Or being smart, because everyone thinks they're smart. It's all those other people that are just of average intelligence.

Yeah, this kind of stuff really does make me cranky, because so much of it is founded on the ways we lie to ourselves. I suppose that's how a lot of people are able to live with themselves, but I'm often struck by how much of the bad behavior that exists exists only because we don't expect better of ourselves.

Lately, I've been very struck by this same kind of attitude in relation to blogging. In this other forum that I'm involved with, there is the frequent question by people of "how do I get more traffic to my blog?" 1. Because, yes, someone can ask the question one day and two days later someone else will ask the same question (pay attention, maybe?). 2. It doesn't matter how many times you say "be involved and visit other blogs," etc, the response is inevitably "I don't have time for that." Well, you know, I don't have time for it, either, but I do it.

[And in this particular corner of the blog world, it also extends to "buy my book," "review my book," "support my book" frequently by people who never do the same for anyone else. Never.]

Basically, there's this attitude of "I should get to be the 'special' one and have everyone else do for me without doing anything back, and, man, that attitude does just make me cranky. I'm sorry, but, if you're not Neil Gaiman, you don't get to have thousands of followers of your blog without being involved. Or, maybe, John Scalzi, but Scalzi is involved. I don't know if he visits blogs, but he supports authors in a lot of ways he doesn't have to.

So what I'm saying is this: if you want people to support you, quit asking; go support some other people. I can guarantee you, if you do it sincerely and consistently, people will notice. I mean, I notice when someone has reviewed (or even rated) something of mine, and those people get more of my time when I'm doing something to support other bloggers/writers. If you put a new book out, I'll probably buy it (unless I just can't afford to at that moment); that doesn't take any time or much effort. If you've reviewed something of mine, your stuff gets higher on my list of things to do, not because of trading favors or anything like that, but, if you've supported me, I want to support you. [Which does not mean a "good" review, but it does mean an honest review.] If I had more time to read, I'd review more stuff, but I do always have something "indie" that I'm reading, and I review everything I read.

I'm not saying that visiting blogs and commenting and reading and reviewing are miracle cures to traffic woes, but it's where you start. I mean, I don't care how brilliant your blog is, if I stop by there consistently and comment and you never visit me back, I'm probably going to quit coming around. Unless you're just that brilliant. Or Neil Gaiman. Or John Scalzi. Because, and let's just face it, you're not that special. Neither am I. But, then, that's why you see me visiting and commenting.

This post has been brought to you in part by Alex Cavanaugh and the IWSG.
Posted by Andrew Leon at 9:44 PM