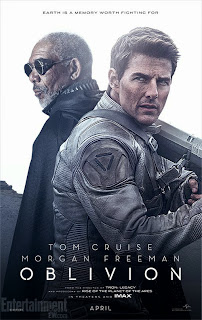 There is, sometimes, a desire to see a movie that you know is going to be bad, but you just can't talk yourself out of seeing it. For whatever reason. Maybe, like with the Die Hard movies, you've seen all the other ones and can't make yourself not watch the newest one despite all the dumb pouring off of it. Or, maybe, there's just some cast member that you just have to see every movie that he's in, like I was with Harrison Ford back in the 80s. Or, maybe, the movie just looks cool and you hope you're just wrong about how bad it's going to be. That's kind of where I was with Oblivion. It just looked cool, and I was hoping, maybe, it was one of those things that the masses wouldn't get into but was really kind of good.

So here's the spoiler warning, because I'm not going to try to not talk about aspects of the movie, so, if you think, like me, that the movie looks cool and you're probably going to watch it anyway despite what I say (just don't do it. really), you shouldn't read this. If you want to know about all of the dumb (you should!), read on.

I realize this isn't an issue for some people, but it is for me, as I've mentioned before: The movie did that opening narration thing to explain what's going on. I'm convinced that opening narration is almost always a bad thing. If you have to have it, you have either (1) started your movie in the wrong place (2) failed to provide information within the movie in a way that works for the viewer. The Star Wars movies are one of the few places where you can find effective opening narration (in the form of the prologue scroll). And, then, not only did Oblivion open with the narration providing the viewer with an out-of-character monologue of events, but all of that same information was provided about halfway through the movie in almost exactly the same format. Please, do not provide me the same information more than once in your movie. I can almost guarantee you that I got it the first time (which is why I tell my kids to not repeat themselves when they do something they find funny: I did just see it happen).

Despite the opening narration, the movie doesn't make much sense. Ostensibly, Jack and Victoria are a team placed on Earth to defend these large fusion reactors, but, really, why are they needed? There's actually no good reason for them to be there. Sure, sure, he's some technician who has to repair the drones, but that's flimsy at best, because that whole set up is just to support the fact that they want this character that doesn't have any memories, but from any kind of logical standpoint, it doesn't make any sense. I mean, it might (almost) make sense if the stated premise of the movie was true, but you know it's not, because, even if it was, what would be the point of erasing the memories of the support teams? However, with the knowledge that the aliens are really in charge, there is absolutely no good reason to have things set up the way they are. Why do they need humans to repair their drones? And why, after the Jack clones fought for them as their army when they took over the Earth, do they need to trick the clones into believing they're normal humans anyway?

Then there's the problem of Jack having this whole wilderness retreat that he's built, somehow, without anyone finding out. He's able to just turn off the tracking unit in his (what I'm calling) dragonfly ship (which  is very cool, by the way) and go "off comm." What the heck? His navigator person (who never leaves "the tower") doesn't have any idea where he is when he does this and neither do the aliens. Seriously? They just allow him to go off and do secret things without bothering to know what he's up to. Completely implausible. Sure, it makes sense if you believe the story as it's presented at the beginning of the movie, but, again, you know that's not the whole story fairly quickly, and the idea that the aliens (or whatever) would just allow this is beyond imagining. It's what the writer/director do to support the lie and get the audience to buy into it, but those things need to make sense after the truth is revealed, too.

Jack has these dreams... dreams of being in New York before it was destroyed, but that was 50 or so years ago, and he's not that old. My wife kept joking about them being "clone dreams" because, at that point, we were trying to go along with what the movie was telling us. Trying. But we both knew she was right. Right in that being what the movie was going to say they were: memories of Jack's life before he was cloned by the aliens. Seriously? This isn't the 80s anymore, and we already knew in the 80s, even in sci-fi, that clones don't get the memories of the being they were cloned from. The memory flashes work if his mind really was "wiped" before his mission, but it doesn't work as some remnant from his genetic donor. It's just dumb. Why can't we seem to get past this stupid idea that clones have the memory of whatever they were cloned from? (And, again, I just have to point out that Star Wars does not do this, the only sci-fi clone movie I can think of that doesn't fall back on that tired idea.)

Also, the drones, which can follow Jack's "DNA trail" (really? we leave a trail of DNA in the atmosphere even when we're in an enclosed, airtight vessel?) have a problem with his voice identification and consider killing him more than once. I suppose they can't sense his DNA when he gets too close. That's only a long-range thing. (Do you sense the sarcasm there?)

And there's the bit where the drones are flying through the human hideout blasting everyone into cinders but, when one of them corners Jack's wife, Julia (introduced only to be a princess-in-the-tower character), and a bunch of other humans in a dead-end corridor, it pauses and decides to scan them. Again, really? The drone, programmed to kill humans, suddenly needs to stop and scan them? For just long enough for it to get exploded from behind, of course.

And, after all of that, we're not even up to the stupidest part of the movie. I know! I see your jaws hanging. The stupidest part is when he finally flies up to the alien ship, this huge, upside-down pyramid thing, and it's just full of vast expanses of space on the inside! When did this become a thing and what kind of sense does it make? So, yeah, he's flying through this huge space and, every once in a while, he has to fly through an opening in a wall, and the walls are covered in clone pods. The only other things in the huge alien space ship are drones. No aliens. And, when he finally gets to the center to arrive at "Sally," it's just another inverted pyramid thing with a flashing (talking?) red light. NO ALIENS! So tell me why they needed to take over the Earth and use it as a source of material for their fusion reactors IF THERE ARE ACTUALLY NO ALIENS? And, if that's all they needed, why didn't they just stop at any of the unpopulated planets on the way into the solar system? Wouldn't that have been so much easier than having to fight a bunch of humans for the materials they wanted? AND WHERE WERE THE ALIENS?

There was also an even more stupidest part. The part where somehow the flight recorder from Jack's spaceship from when he first got captured by the alien ship went from being in the command module, recording what was happening, to being in the sleeping quarters of the ship even though the sleeping portion had been jettisoned. Because that makes all the sense.

The acting, though, wasn't bad. Not great but not bad, either. And the tech was decently cool. But there was a reason (many of them, actually, as I've pointed out) the movie didn't make back its production budget domestically. So, unless you just have to prove to yourself how dumb the movie is, this is not one I could suggest to anyone.
Posted by Andrew Leon at 9:29 PM