Have Some Milk with Your Serial

Today is the release of part 4 of Shadow Spinner 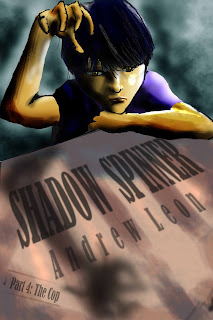 "Part Four: The Cop" is available for the Kindle for FREE! Monday, Sept. 10 -11! Go get it now for FREE! Also, just to be nice, "Part Three: The Bedroom" will also be FREE! Monday only. Go grab them now and, remember, click the "like" button and come back later and leave a review. It would be a great help! Thanks!

I started this whole serial release of Shadow Spinner as a bit of an experiment. While I'm not quite ready to reveal the details of said experiment (I still need a few more releases to figure out what I'm seeing as results), I will give you some background on the whole serial thing and part of what lead up to my decision to do a serial release.

Marketing is my bane. I hate it. It's something I wish I didn't have to spend my time on, because it takes away from time I could be, oh, working on actual writing like on Brother's Keeper, because, yes, now that school has started, I have several kids a week (at least) asking me when it's coming out. Of course, I'm trying to finish Shadow Spinner first (okay, I am going to finish Spinner first), but they don't care so much about that because they just want the sequel to The House on the Corner. Then there's the part where I'm pretty sure I would have finished Spinner already if I didn't have to spend time doing marketing stuff.

All of that to say that one of the things I've seen kind of over and over again in doing marketing research is that serializations are BAD! Bad in the same way that adverbs are BAD, and not you or anyone else should ever ever ever release a novel in a serial format. It made me wonder WHY.

I mean, why not do it? There is a long tradition of authors releasing their novels in a serial format. Charles Dickens did it. He even used it to get audience reaction to his stories so that he could make tweaks to stuff before the book was finally released as a book. Heck, the whole end of Great Expectations changed between the serial release and the final book release. All of Isaac Asimov's early stuff was released serially. The whole Foundation Trilogy (when it was still a trilogy) was released that way as well as all of his early robot stuff (which turned into I, Robot).

Sure, it's not done so much today, but, really, why not do it?

So here's something about me that you might not know... or, maybe, you've managed to figure it out, I don't know. Anyway... Telling me that something is wrong or bad for no other reason than that it is wrong or bad is a pretty good way to get me to try doing it. Or, at least, to take a closer look at it to see why you're saying that. You need to have a good reason for what you're saying is what I'm getting at here. In a like manner, telling me "this is just how it's done" and so you should do it this way, too, is a good way to make me look at other options. Give me reasons not dogma.

[I just have to throw in here that my first, great Magic deck was built because someone said a deck couldn't be built around the Kird Ape. I became feared in tournaments because of that deck. Yeah, I know that's completely off topic: I blame Michael Offutt for bringing up Magic: The Gathering on his blog recently.]

At any rate, that question wouldn't leave me alone, "Why not do serializations?" I couldn't find any good reason not to, so I decided to try it out.

Which brings me to my point:

It appears that Amazon Publishing is setting up some deals for some serializations under a new imprint they're going to be starting up just for that purpose. First, I didn't realize that Amazon had its own publishing imprints, but they do (several, actually, including one for sci-fi), and, now, they want to add a new one just for serialized novels. They're looking at it as the "logical next step" in publishing, evidently, because people like things in smaller bites, and like them in forms that work on  their portable devices.

It looks like I'm not the only one to ignore the whole "don't do serializations" thing. And this is why you should ignore the whole "no adverbs" thing, too. People just like to say NO for no other reason than saying it. And you can't get good reasons as to why not, because they don't have any; they just know that other people said NO, and that's good enough for them.

I don't know how this whole serial release thing is going to work out in the end, but I'm glad, now, that I'm doing it. Not that I wasn't glad before, but, see, I'm not jumping on any bandwagon here. Not that there will be a bandwagon, but, if there is, I was here first!