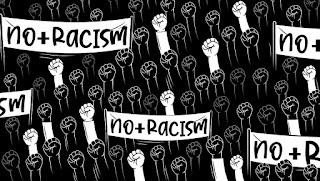 Let's talk about grammar for a moment.
Yeah, yeah, I know that's not what the title of this post suggests is about to happen, but we're going to do it anyway.

So let's talk about racism...
Racism has a specific denotation which includes both a person's hatred of some other racial group and the belief that one racial group is superior to some other (or all) racial group. Racism can be one or both of these things.
However, the connotation of racism, meaning how most people use it, is the hatred of some other racial group. And this is where we run into problems and why white supremacists are "winning" the racism battle.
It's clear that Trump (#fakepresident) has run and is running on a white supremacist platform and that he has surrounded himself with white supremacists, some of them more explicit than others about their white supremacy (Stephen Miller, Asshole Supreme). It's also clear that Trump's "base" support this white supremacist platform, some of them more explicitly than others. It's so very clear that all of this is racism and that all of these people are racists. After all, it's right there in the definition of racism, the belief that one race is better or superior to some other (or others) race.
But that's not hatred.
So when you call out a Trump supporter for their racism, what they hear is
You hate black people.
or, maybe,
You hate Mexicans.
They hear "hate" and, of course, they get upset by that. What they're thinking is, "I don't hate anybody." Well, except, now,  the person calling them a racist.
All of which might explain the animosity between Conservatives and Liberals.
And, no, I'm not saying that Conservatives didn't start all of this shit, because they certainly did. That's not even an opinion. You can trace all of the current political turmoil back to Newt Gingrich (and, man, if my parents named me "Newt," I might be full of the same kind of vileness as him) and, before him, the rise of the new fundamentalism in the US, which took on a new life in the late 60s and through the 70s as a reaction both to the Civil Rights movement and hippies and their "free love."
But it doesn't really matter who started it, because someone has to be the adult in the room, and the Conservatives are not that. They are more like toddlers throwing a tantrum, and they hate being called racists. It just makes them more petulant and foot stomping.
Before you ask, no, I don't have any good ideas on how to deal with this issue on a global level. Or even, really, a personal level, other than having real conversations with Trump supporters about what it is they believe and what they are voting for and trying to explain that believing "white people are just better" is racism. Of course, the problem there is that most of them haven't verbalized their belief like that in their own heads; they just know that the system, as it has been, the system that supports white people at the expense of brown and black people, is the system they want. The "white people are better" system. So I don't know...
It's all very complicated. Except that it's really not. It's a bunch of people who can't see those Magic Eye pictures claiming that it's not real just because they can't happen to see them. Or don't have the patience to learn how (you know, refuse to be educated).
What I know is that approaching Trump supporters as racists isn't working. It hasn't been working, and it's not going to start working; it doesn't matter if it's true. At this point, because there's not really a lot of time left before what could be the most important election in US American history, the best thing to do as a liberal or a Democrat or just someone who opposes Trump (#fakepresident) is to show up and vote. Or, you know, mail it in. Just make sure you vote. This is not a time for thinking that your one vote won't make a difference. Every vote counts, and it needs to be overwhelming. VOTE!
Posted by Andrew Leon at 12:00 AM