It's Time To 'Face the Music' (a movie review post) 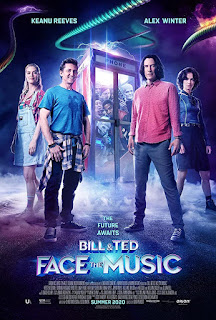 Let's start out by laying the 80s out on the table and being upfront about it: It was a weird time.
We started the decade believing we were all going to die in a nuclear holocaust and ended it believing politicians and the people in power had finally realized that nukes were an unacceptable alternative. The Berlin Wall fell, and we all thought that things might be okay. In between, though... In between,
we knew saving the world would require a miracle. [As it turns out, we were probably right about that. Gen Z is probably our last chance for it.] For whatever reason, we believed that music could be that miracle.

It's not like we didn't have reason, I suppose. We had "We Are the World" and Live Aid and all sorts of similar things after that. The power of music to unite seemed to be a real thing. I suppose it's not surprising that it culminated in 1989s Bill & Ted's Excellent Adventure, in which music does literally unite the world. Or will. Or will have would have. At the time, Gen X fully bought into the idea that, in the end, people would do the right thing. That's what movies and TV taught us. All you needed to do was believe hard enough for things to turn out right. Bad guys would always see the error of their ways and make things right in the end. That or the idealistic earnest protagonist would show the world the true character of the bad guy and he would be defeated.

Of course, recent events have shown us that a significant number of people not just don't care about the true nature of the villain, they revel in it. Yes, white Boomers and other Trump (#fakepresident) supporters, I'm talking about you.

Which leads us to Face the Music in which we learn that music has not, in fact, saved the world or anything close to that. The idealistic earnest protagonists have failed. Their idealism was not enough. Their earnestness was not enough. They have, indeed, been defeated by windmills much like Don Quixote. And time is pretty much up.

The premise is more than apt.

Of course, the plot involves Bill and Ted attempting to finally write their song that will unite the world and save the universe from certain doom while being chased by a killer robot and trying to save their marriages. Or marriage. There is some amount of an inability for them to think of themselves as individuals. Also, their daughters get involved in trying to help out, which involves a whole separate time-travel adventure.

And that's about all I can say about the plot without getting spoilery, which I suppose I'll avoid.

I think we've all learned that music is never going to unite... anything, really. People don't seem much inclined to even agree on what music is, and music is more diverse than ever.
However, the movie is still on the "excellent" side of things.

Keanu Reeves and Alex Winter slip back into their roles as if these are their true personas. And they wouldn't be bad personas to have. If more people were like Bill and Ted, the world would be a better place.

Kristen Schaal replaces George Carlin. She's fine. I like Kristen Schaal, but they don't really give her much to do and her mere presence doesn't bring with it any kind of expectation or anticipation, unlike Carlin. Much of his role was accomplished just by his being there.

The daughters are played by Samara Weaving and Brigette Lundy-Paine. I think it's pretty clear they are there to set the stage for future sequels in which they are the stars. That's more than okay with me. They were fun onscreen That said, it was Lundy-Paine who really stole the show. She really nailed the part of Ted's daughter. I felt like I was watching two Teds on the screen. She got his mannerisms, his mode of speech, everything. I was, like, totally impressed. Dude.

All of that and Death is back, too. Now that's an entertaining subplot.

Anyway, the movie is totally worth watching, and you don't even need to be all that familiar with the previous movies to enjoy it. Now I just need to sit down and watch them all three back to back to back.
Posted by Andrew Leon at 12:00 AM