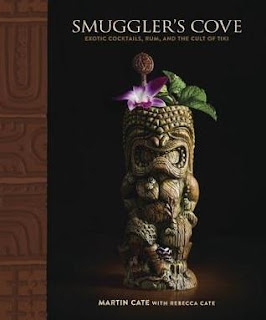 My wife and I have been dabbling with cocktails for a while now. Well, a short while.
Okay, it all started in 2017 when we went on our gold country trip and stayed in Columbia. We had this pair of cocktails: 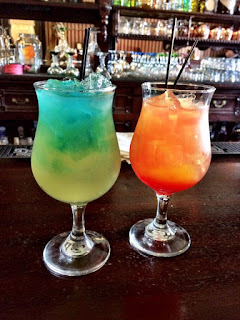 which, I'm pretty sure, was the first time I'd ever had a cocktail. Maybe I'd had a pina coloda -- I don't really remember when we started making those -- but that would have been about the extent of it.
After or trip, we started trying cocktails when we would go out to places that served cocktails. Sometimes, we even looked for places that served cocktails as part of our decision process. Of course, we don't really go out a lot, so it's not like it was something that happened very often.

So we started making the occasional cocktail at home, especially pina colodas, the family favorite (because you can leave the rum out for the kids). I learned how to make margaritas. But that's where we hit a wall, I guess, because my wife bought me a book, Be Your Own Bartender, and I learned how to make a daiquiri. A real daiquiri, not those slushy monstrosities.
We tried out other things from that book, but it was too all over the place. I'm not saying it's a bad book or anything -- it definitely served a purpose -- but it only had a very limited number of drink options for any given category and it became a hassle trying to get just the various base alcohols for the different drinks. That and we discovered that my wife really just likes rum. Rum for cocktails, not on its own. On its own, I'd much rather have whiskey, which I like straight, but I'm not going to drink rum on its own.
All of which led to my wife buying for me for our anniversary this year the book at the top of the post, Smuggler's Cove, a book all about tiki cocktails, most of which are made from rum. Nearly all, actually. Did you know that cocktails originated with rum? And, kind of, with pirates. This is why pirates beat ninjas. They fucking invented cocktails! That's free information; I don't know if it's in the book or not.

However, the book is full of all kinds of history, which I will get around to reading at some point. I just haven't had a chance yet. My attention has been on the cocktail recipes themselves, over 100 of them. My personal favorite, at least so far, is the Planter's Punch. Which is not exactly accurate, because the recipe in the book is just an example of -a- planter's punch. It was just a catchall name given to a class of drink of which there were endless variations because every plantation owner had their own specific recipe. My wife has discovered that she loves Mai Tais, which, by the way, despite its association with Hawaii, was invented right here in Oakland, California. Also, by the way, the Hawaiian version, which adds pineapple juice, is vastly inferior to the original, basic Mai Tai.
I'm actually a little upset with my book. My wife got me this nice hardcover copy of it, and it's a first edition, and I am going to wear the shit out of it. Not that I think this book will necessarily become valuable, but it ought to. It's that good.
Aside from being chock full of recipes, there is also a section about how to create your own cocktails. I've been fiddling around in there quite a bit and have devised two of my own that I find quite tasty. As I continue to experiment, I'll post my personal recipes here on the blog. However, I'm not going to share recipes from the book unless I've adapted it in some significant way.
None of the cocktails I'm making at the moment are as pretty as the ones in the picture above, but they are very good. At some point, I'll start working on presentation and figure out how to make drinks as pretty as those up top.
Anyway, if you're interested in cocktail making, especially rum and/or tiki drinks, I'd give this book a strong recommendation.

Well, this became more of an actual book review than I'd intended, but I guess that's okay. I'll have some cocktail recipes posted soon.
Posted by Andrew Leon at 12:00 AM