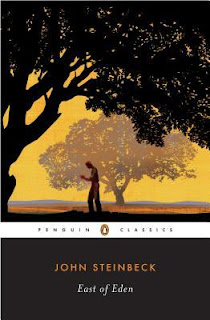 Once upon a time, I would have assumed general knowledge about the story of Cain and Abel. About most Bible stories, actually. But, then, I grew up in the Bible Belt where I was surrounded by people, whether they were church-goers or not, who had general knowledge of Bible stories. That assumption on my part was wrong. I've learned (and learned hard) to never assume knowledge by other people. Or, even, any kind of intelligence or curiosity or desire to know things.
So let's talk about Cain and Abel for a moment because Steinbeck believed that it was one of the most, maybe the most, foundational allegories from the Bible. He felt it was so important that he used it twice in the same book. Yes, twice. I'm not sure he's wrong. The sequel I'm working on to The House on the Corner is called Brother's Keeper and uses some of the same themes.
If you don't know the story of Adam and Eve, you'll  have to go research that one on your own.
Adam and Eve had two sons: Cain and Abel. Cain, the older, was a plant man, and Abel was an animal man. God asked them to make some sacrifices to him and, of course, they offered him the stuff they were each familiar with. Cain brought god the fruits of his garden, and Abel provided a barbeque. As it turned out, god was into meat and really liked the lamb chops Abel cooked up and left the salad untouched. God later died of a heart attack because he didn't eat his greens, but that was later. At the time, he snubbed Cain's gift and this, of course, caused Cain some amount of upset.

Having done a bit of reading up on Steinbeck, I'm going to go out on what is probably not much of a limb and say that Steinbeck was very against racism, to the point of his name removed from the writing credits of a film that he felt had racist undertones that his script did not contain.

I'm not going to lie and try to pass of Eden as an easy read, but it's not a difficult one. It's just a bit long and, at times, it's difficult to tell where the story is going. But, you know, I think it's going the same place that life goes. It just goes. It's sprawling. It would never get published today at the length it is. Whole sections would get cut out, and the book would be the worse for it, so I'm glad it was written when it was and that it came out the way Steinbeck wanted it to.
Go read it.
Posted by Andrew Leon at 12:00 AM