A Return To Writing? Who Knows... 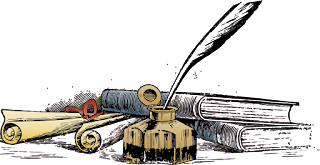 Some of you may have noticed that I wrote an actual post last week. Ah, who am I kidding? That post received one whole comment, so I'm pretty sure it had about as much impact as a feather falling on snow. But, whatever, right? No one comes here for the words; it's all about the pretty pictures these days. I guess I can't really blame anyone for that; I do take some pretty pictures. But, you know, I haven't turned this into a photography blog... yet.

I suppose that's what instagram is for, though, but I haven't gotten very good at posting pictures to there. When they start letting me post them from my computer, I might get better at it. Right now, I have to move my pictures from my camera to my computer and, then, onto my phone to be able to upload them, and that's more than I want (or remember) to do most of the time. Besides, who puts pictures onto their phone? That's assbackwards.
But I digress...

So will I be writing more?
I don't know for sure. I want to, but time these days... Look, it took me two weeks -- two weeks! -- to write my review for Face the Music. And that shouldn't have been a difficult write up but, I suppose, with kids home all the time now...

Don't get me wrong; I don't want my kids not at home. I mean, I don't want my daughter in school, that's for sure, not that she didn't already have COVID-19, because we're pretty sure she had it back in February. We're early adopters, don't you know. But I do wish they didn't make so much noise. My kids, I mean. All the time. Background music is not my friend when it comes to writing, but I'm pretty sure I wrote about that way back in the mists of time.
Wait, wait... The Myst of Thyme.
Why wasn't that a thing?

Anyway... I have things I want to write. I have a bunch of drafts that are mostly just titles so that I will remember my ideas for posts, but getting thoughts onto virtual paper has been a... challenge. To say the least.
And, of course, with the election coming up... Let's just say that the chaos is only going to get louder.

Personally, I'm a bit tired of the chaos. The seven largest fires in California's recorded fire history (which started in 1932), as well as the first and fourth most deadly, have been since trump (#fakepresident) was elected. And I'm not saying there's any causality, but it's a difficult correlation to deal with.

Actually, I'm not saying there's not causality, either, because he, trump (#fakepresident), has been a horror to the environment. And, dude, come on, stop telling us to rake the forest! Shut your stupid, fat pie hole. Science is real, not an opinion.
Which is my cue to say one word: VOTE!

As I said to someone earlier today (the day I'm writing this, not the day you're reading it), trump (#fakepresident) has treated his presidency like a demolition derby, speeding around in his great clown car squeezing his great clown horn. The problem? Everyone else has tanks. And he can't tell.
That's also beside the point.

As I was saying, I have things I want to write, so, hopefully, this place will start to be more of a writing space again.
I guess we'll have to see what happens.