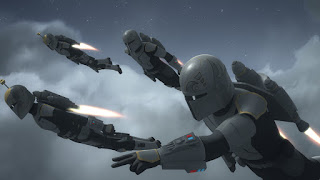 -- "Maybe things have changed. They might be happy to see you."

You know, crash landings in spaceships in the Star Wars universe is way safer than crashing a car here in ours. I mean, no one ever dies. Or is even hurt. Sometimes, the spaceships aren't even hurt that bad. I suppose 40 years of precedence is hard to overcome. No, I don't know why I've never realized this before, but this episode gets us going with a crash landing, and the realization sort of just hit me like a spaceship to the skull. Not only is everyone fine, but the spaceship doesn't need any repairs.

Mandalore has gone over to the Empire, something I'm not sure I've mentioned in any of my earlier reviews, and their armor looks pretty cool in white. Sabine has gone home with the darksaber to try to rally support to the Rebellion. Hi-jinks ensue.
By hi-jinks I mean betrayal and family conflict.

This episode marks a turning point in the series. I'm not sure what kind of turning point, but I will say that Ezra and Kanan leave Mandalore with only Chopper, leaving two of their companions behind.
Yeah, read between the lines; I'm not spelling it all out for you.
Or go watch the episode.

"Didn't you tell them who you were?"
"That's probably why they're shooting at us."

"That went better than expected."
"That was better?"