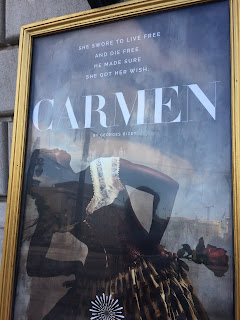 Carmen marks the first opera I have seen more than once. Evidently, it's one of SFO's favorite operas to perform, so I suppose you should expect another Carmen review in two to three years. This was a different production than the one we saw last time, and, I have to say, this one fell short. It's something that I'm saying that, too, because, at the point of the intermission, I announced to my wife, "I like this one better than the last one." I was wrong. But I'll get more to that in a moment or three.

First of all, this was a much more traditional production than the previous one. What I'm learning is that the new general director of SFO, having taken over in 2016, just after we started attending, is very much a traditionalist in his approach to the productions of older operas. He's British, so maybe that's why? It's not that they don't perform newer operas, after all, since we've been going, they've debuted several new opera productions, but, since he's been in charge, the trend has been to return all the staple operas to more traditional styles of productions. So, last time we saw Carmen, we had a show set in the 60s or 70s, while this recent production returned us to the 1800s. I don't know that this traditionalist approach is a detriment or not, but Carmen, in particular, seems to be ready for a more up-to-date interpretation.

I believe the reason I liked the first half of this particular production as much as I did is that Don Jose, the male lead, is not actually in it much. I enjoyed J'Nai Bridges in her role as Carmen. She very much embodied the character and was fun to watch. Matthew Polenzani, however, was barely believable in his role as Don Jose. He creates no romantic, sexual, or violent tension, and all three of those things are required in the male lead.

I would kind of love to break it all down, but I think that would take too long and, ultimately, prove to be uninteresting, so I'll give the highlights:
1. Polenzani turns what should have been a highly charged meeting of sexual tension into something that more resembles insta-love, as he ignored Carmen during the entire exchange. Once she's off the stage he picks up a flower she threw at him and decides he's in love with her.
2. During the pivotal scene where Jose is forced into running off to the mountains with Carmen, it doesn't actually feel forced. It comes across more as an "oh, well..."
3. During the final scene, Carmen keeps going on about how Jose should just go ahead and kill her if that's what he's going to do, but Polenzani managed to be so non-threatening throughout the production that it comes across as emo whining on the part of Carmen rather than any real threat upon her life. It makes her murder somewhat out of the blue and arbitrary feeling, more like he did because she was saying it rather than there being any threat of murder hanging in the air.

It's so bad, in fact, that when the romantic rival shows up, I really felt like Carmen should go off with him. You're not supposed to be rooting for this guy and, in the previous production we saw, I wasn't. In the that one, he felt like the villain he was supposed to be but, in this one, he felt like the better option. You could feel his passion for Carmen and could support that over Jose's milk-toast ambivalence.

Now, I realize that a lot of these issues could be directorial, but I think the lack of believable passion from Don Jose falls squarely on Polenzani's shoulders. Unless, maybe, the director told him to be as uninterested as possible, but I highly doubt that. Maybe it all would have been fine if I had just shut my eyes and listened to the music only but, then, I wouldn't have understood it because I need the translation on the screens.

All of which is to say that the specific production can make a huge difference in an opera. Yes, I knew that... in my head... but I had never experienced it before. Not in an opera, anyway. It's interesting to get this perspective.
Posted by Andrew Leon at 12:00 AM