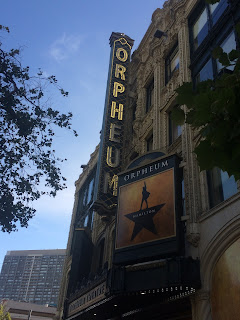 "Ladies and gentlemen, you coulda been anywhere in the world tonight!
"But you're here...!"

Okay, maybe you couldn't have been anywhere, and maybe you're not here -- actually, looking around me, I know that you're not -- but you get the message, I'm sure.
Or, at least, I hope you do.

As I said last post, we in my family were kind of early adopters of the whole Hamilton thing. Christmas of 2015 was full of Hamilton merchandise, and we hadn't done more than listen to it online before that. A lot. Seriously. A LOT. But after Christmas, there were CDs and, then, the music went everywhere with us. I did mention, didn't I (last post), that 2/3 of my kids know the entire thing, basically, by heart. Actually, the 1/3 might also know it, but he tries to feign indifference to Hamilton. (It's complicated.)

At any rate, it's the kind of immersion that makes me wonder about the necessity of seeing the actual stage production.
Let me tell you a brief story:

Once upon a time, I had never been to Disneyland. When my extended family found out, they were amazed and dumbfounded and decided that had to change. But I'd been to Six Flags, many of them many many times, and didn't get the big deal. I mean, it's just a bigger amusement park, right? Boy, was I wrong about that. It's the difference between a McDonald's cheeseburger and the best hamburger you've ever had, unless a McDonald's cheeseburger is the best burger you've ever had, in which case I'm very sad for you.

Yes, what I'm saying is that the stage production is so worth seeing. It was... tremendous.

That said, there is one hangup I have with Lin-Manuel Miranda over Hamilton. It's a small hangup because the work is, overall, amazing, but it's still there, and I would definitely point it out in any other piece of work (and have). Miranda needlessly changes the history in a few places. I'm not talking about changes one might make to a story so that it would flow more smoothly or something; he just changes some facts here and there. Even though they're relatively "small" things, in this day and age, I think it's dangerous. For one thing, it gives people who want to detract from the larger Truth of the work an opening to do so. But, also, since people tend to not bother with knowing history stuff, it leads them to believe things that aren't true. You know 99% of people who have seen this had no idea who Alexander Hamilton was before they saw Hamilton. [Yes, I pulled that number out of my butt. It's a metaphor because I have no idea what the actual percentage is, but I know that it's very very high.]

Of course, he did write it before all of the fake news and alternative facts, so maybe he wouldn't do it that way again. It just happened that it exploded onto the scene and was quickly followed by the quasi-reality we're all living through right now.

Other than that, there's nothing bad I can say about Hamilton in general. It's a great opera. Even I know some of the songs. And seeing it live... well, it took it up another level.

For one thing, there are a few things you can't get from just listening to it, things I didn't really realize I hadn't gotten until I saw it. I didn't know I was missing stuff, because I was out of context from the action on the stage but, when you see the performance, the lyrics in places click into place and it's like, "Oh! That's what that means!" Plus, I don't have the best ear, so I can't always tell when I'm listening to it who is singing what in the pieces where there are a lot of singers telling different bits, like in the opening number, so, for me, it was really nice to be able to see who was singing what.

As you can see from the picture, 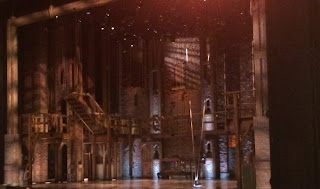 the stage was pretty impressive. There were rotating portions of the stage as well that produced some interesting effects at points as people were rotated in opposite directions or were able to walk without moving across the stage.

The cast was great, even Simon Longnight as Lafayette, at which point I didn't care for him because of the nasal pitch to his voice, but I wasn't sure if it was him I wasn't liking so much as the faux French accent for the character. In the second part of the production, he becomes Thomas Jefferson, and he was completely enjoyable as Jefferson, so it was the accent that was the issue in the first part. At any rate, that's the only part of the entire production I have any quibble with, and that's hardly even a thing.

Julia Harriman, as Eliza, was powerful powerful during "Burn." I was surprised at how powerful.

Donald Webber gave a similarly powerful performance of "Wait for It."

Isaiah Johnson was amazing as Washington, possibly the best in the case? I don't know. I have a hard time judging that kind of thing. Like I said, I don't have the best ear.

Rick Negron's calves stole the scene as King George, but he was still great. It's not his fault all of us (seriously, we all noticed) noticed the size of his calves. Also, I want to point out, there are parts of the production that contain George where he's not singing, so you never know until you see it. It was so awesome to see him dance around the stage during "The Reyonlds Pamphlet."

And, then, there's  Julius Thomas as Hamilton. He was amazing. I mean, probably not the best singer up there, but he has to carry the show, and he certainly did that. Also, he came out after the show and signed autographs and let people take selfies with him and was so gracious about all of it. Thanking people for being there and supporting the show while allowing them to take up his time when you know he has to be tired and wants to just go home already. I was super impressed.

Look, if you have the chance to go see Hamilton, you should do it. It's an amazing show with fabulous music, and it's playing in several venues across the U.S. and on tour as well. I know you might have to "Wait for It," we did, but it is well worth it. I want to go again.
Posted by Andrew Leon at 12:00 AM