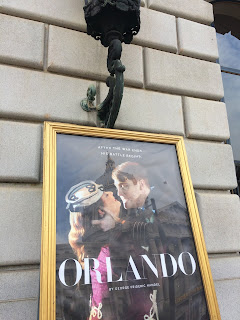 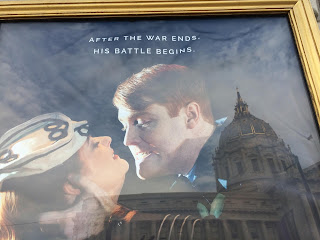 After having said, just this week, what I said about the general director of SFO and more traditional productions of classic operas, here's one that's... not. Which does not change the validity of my statement; the productions have still been trending toward "traditional" rather than "experimental" or "updated" or whatever you want to call anything that isn't set in its traditional setting. But, yes, Orlando gets a more modern setting, and it's a very good thing. I'm not sure how I would have felt about it if it had been done as written. As it is, I'm still conflicted over it.

Orlando is by Handel. Yes, that Handel, the Messiah one. Which means it's pretty. It's also everything that people who have never seen opera think opera is: people singing one line over and over again for five minutes. Okay, maybe three lines, but Orlando is really like that. This could be reduced to a not-even-very-long short story, even shorter if it was dialogue-based.

All that, and it makes use of one of my least favorite writing devices: the deus ex machina.

However!
This production is set during World War II rather than it's original setting, and the opera becomes something much more interesting than having the problem solved by "god" coming down and making everything right. In this case, it's solved by a rather pompous psychiatrist and electroshock treatment. Of course, the electroshock treatment does seem to affect everyone involved, not just the receiver of the treatment, but it's much better than Zeus waving his hands around and making everything good again.

Here's something fun:
My brother, who is six years younger than me, sang in a boys' choir when he was probably about six or seven. Due to his association with that particular choir, I picked up a few tidbits of information about choirs of that sort, the main being that in the not too distant past, even, it was not uncommon for the best of these singers to be castrated before puberty so that they could retain their high-pitched voices into adulthood. Yeah, I'll just let that sink in a few moments...

You ready to go on yet?
Good.

So... Handel had a favored lead male singer who was one of these men who had been castrated to retain his voice, and Handel wrote the part of Orlando for that specific singer. Needless to say, it is, at best, a difficult role for a male to play these days, so SFO cast a woman in the role, which seems to be the norm. I don't know; I haven't done any research on the history of Orlando and at what point it became commonplace to have a woman in the role.

Anyway... None of that has any bearing on the actual opera production. It's just free trivia for you.

It took me a while to get into this one. It starts with this whole thing with the doctor/wizard Zoroastro trying to convince Orlando that he should forsake love and get back to his duty in the war because, you know, he's a war hero, and there are still Nazis to kill. That's probably advice Orlando should have taken because the woman he was in love with was in love with someone else, and so we have a conflict. It's a much more complicated conflict than that, though, more like a love tangle than a love triangle. After awhile, the story got interesting enough to draw me in. It just takes a while when it takes half an hour to cover a few sentences of story.

The set was pretty interesting. They set it in a hospital because Orlando has been wounded and this is where he had been making his recovery. It was, on the surface, a fairly simple set, just a spinning wall that could be different rooms as they turned it from one side to the other. It was very effective.

In the end, I liked it. A lot more than I expected to. It's sort of a stand-in-place-and-sing kind of opera, but the director turned it into a piece that plenty of movement and action. It was good. It helped to pull the audience, or, at least, me, into the performance.

Christina Gansch, who played the nurse Dorinda, really stood out. She was clever and funny and, really, made her role the center of the performance.

I don't know that I'd want to see this opera again, but I'm glad I saw this production of it.
Posted by Andrew Leon at 12:00 AM