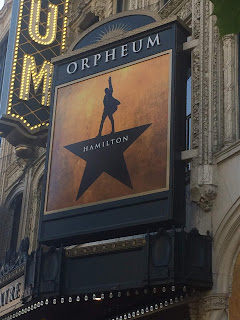 Okay, let's talk about the elephant I just brought into the room: I called this an "opera review post." Why would I do such a thing when Hamilton is clearly not an opera.
Right?
I'm just gonna guess that you don't actually know what an opera is. You just have a vague cultural idea of opera as some snooty upper class thing full of boring classical music and languages you don't understand.
And, well, unfortunately, that's kind of what opera has become, but it's not what it actually is. Oh, and when I say "kind of" what it's become, I actually mean that's not at all what it's become, but I can understand why so many people think of that way: It's how I used to think of it, too.

So what is opera, then? And what makes it different from musical theater?
Or from a play?
Well, both opera and musical theater fit under the broader category of what a play is. We tend to think of plays as the things without music, but they're all plays. If you add a few songs (or more than a few) but the play still consists of mostly spoken dialogue, you get musical theater. If it's a completely sung work, it's an opera.
Don't look at me like that, I'm talking about definitions, here, and definitions are important.

Look at it like this:
When opera was the entertainment of the day, opera was not a snooty upper class thing. Opera was entertainment for the masses and full of popular music. Classical music wasn't written to be classical -- there was no such thing at the time -- it was written to be popular. It's only "classical" now because it has endured. That's how popular it was. You'd probably be surprised at how much of the music you'd recognize if you became an opera-goer. (Just sayin'.) This was Top 40 stuff, is all I'm sayin'.

Also, opera wasn't written in other languages to be inaccessible to people. They were written in the languages of the people watching them. So, you know, French and Italian, especially. Some German. Other languages, too, just not much English. Look, I don't know why the British didn't get into opera writing. If they had, maybe we'd have different ideas about opera these days, but they didn't. Probably something to do with their "stiff upper lip" personality thing. It's a mystery to me. What it means, though, is that all of the big, famous operas from the past are mostly French or Italian, which means that when we think of operas, we get this idea that they have to be written in some other language.

It's the Three Wise Men, okay. It's all assumptions with no facts to back it up.

Hamilton is a sung work. There's really nothing spoken in it. A line or two here or there for emphasis, if you want to get all technical about it, but one word spoken without music doesn't make it not a sung work, so don't try to go all musical theater on me. And, no, the line between opera and musical theater can be blurry, but it's not so blurry that it extends to a word or two.

Hamilton is full of popular music. It's very singable. I know, because 2/3 of my kids know the entire thing by heart. It's also in the language of the people, which I'm just gonna say again, older operas were not written in some special "opera language," they were written in the languages of the audiences and the composers. It's not surprising, then, that Hamilton is in English.

So, Hamilton is an opera, which means that if you've seen Hamilton or listened to Hamilton, you've been interacting with opera. If you enjoyed Hamilton, you're enjoying opera.
It's not my fault; I'm not making this stuff up.

It also means that Lin-Manuel Miranda is the most famous opera singer in America.

My family's involvement with Hamilton began in the fall of 2015. NPR did a piece about it which my wife heard on her way home from work. She came home and played a bit of it for me, sure that I wasn't going to like it. Hip-hop isn't exactly my style of music. She was astonished when I liked it and told her to let it play. Maybe it was that I already liked Alexander Hamilton and had thought since high school that he's kinda gotten the short end of the stick. Maybe the music is just that catchy. Maybe it was a double-full blue blood moon and the tides were both extremely high and non-existent. I suppose it doesn't really matter why, but I liked it and, because, at that moment, I told my wife to let it play so my daughter heard it and she liked it and, well, it just cascaded from there.

We were all very disappointed that it only won 11 Tony awards.

All of which is to say that we didn't just go see Hamilton because it was a thing to do and people talk about it a lot. It was a dream-fulfillment thing, especially for my daughter. And it was her birthday present, which we will probably never be able to top.

None of which has anything to do with the performance that we saw, but that will have to be next time...
Posted by Andrew Leon at 12:00 AM