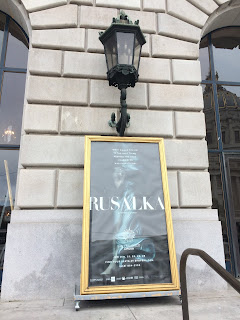 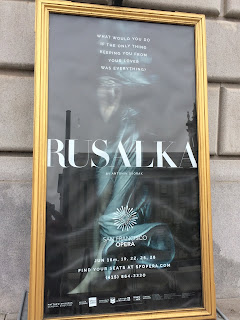 I mean, have you even read fairy tales? Do you know what they're really like? The originals? Like, in Sleeping Beauty, part of that story has to do with the fact that she was impregnated while she slept. And The Little Mermaid? Dissolved into sea foam. Dissolved! And washed away because the prince decided to marry someone else because trying to get on with a girl who couldn't speak was too much for him. And don't even ask about Cinderella's stepsisters' feet.

Back in the day, fairy tales were cautionary.

Imagine taking a cautionary tale, one in which the protagonist dissolves into foam at the end, and turning it into an opera, a form already rife with tragedy! Yes, Rusalka is largely based on Hans Christian Andersen's mermaid story, though it draws inspiration from other sources as well, especially Wagner's Ring Cycle.

Rusalka's not a mermaid, though; she's a water nymph. Close enough, right? Her father is the Water Goblin; he seems to be the guy in charge of all the nymphs. Not that that's explained, but the opera opens with all of the other nymphs cavorting around and trying to gain the "favor" of the Water Goblin. All while Rusalka pines over the prince who can't see or hear her because she's a water nymph and lives down in a lake.

But I'm sure you know how the story goes.
Apart from the tragic ending, that is.

As is so often with SFO, the sets were amazing! I mean, really amazing. Maybe the best sets they've had that we've seen? I don't feel qualified to judge that, actually. What I really loved was that during the forest scenes, which were full of nymphs and fairy creatures, the trees moved around. It made it feel really magical to have the scenery shifting around during the action. The rest was really impressive, too.

As always, the performances were excellent. I think Rachel Willis-Sorensen was especially good as Rusalka. She brought an appropriate amount of longing and despair to the role. There's not a lot of joy for the character, only that brief moment when the prince notices her (after she's made her deal with the witch) and takes her to his castle. After that, the prince goes about flaunting another woman, basically, right in front of her. It doesn't get better from there. Willis-Sorensen does a pretty perfect job of channeling the character's grief.

I'm not saying this is one of my favorite operas, but I enjoyed this one more than my wife did, a rare occurrence for us since my wife starts out at a much higher love for any individual opera than I do. She's loved opera since she was a teenager, and I'm just learning it now. She felt the music was too slow in this one, and I can see that, but, thinking about it now, I might describe it as lush rather than slow. At any rate, it's definitely an opera I'd be open to seeing other iterations of.

One other thing of note: Rusalka is a Czech opera, as was The Makropulos Case, which I am still rather fascinated with and would like to see again. And it's from Czech theater that we get the word "robot." But Czech opera and theater hasn't been very popular outside of itself, mostly due to the difficult language, according to the experts. I'm intrigued enough that I want more.
Posted by Andrew Leon at 12:00 AM