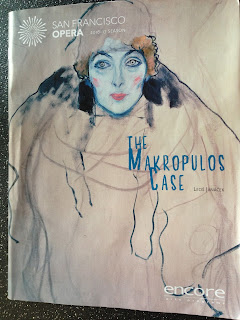 Way back in 2012 (wow! It's really been a while), I did a post about the introduction of robots (and androids) into fiction. The term "robot" was introduced by Karel Capek in his play R. U. R. or Rossum's Universal Robots. The term actually means "drudgery," which is the kind of works that robots were invented for. Capek is most remembered for his science fiction and was even nominated for the Nobel Prize in Literature SEVEN times, though he never won.

He also wrote a play called The Makropulos Affair (or Case or Secret or Thing, depending upon the translation) about an "immortal" woman. The play was seen by Leos Janacek who decided he wanted to write an opera based on it. When he approached Capek with the idea, Capek told him he was crazy and that it would never work. After some amount of correspondence, Capek relented and allowed Janacek to produce the opera.

I think there is probably actually too much I could say about this opera that sets it apart from your "normal" opera. For one thing, Janacek wrote the score and the libretto (the words), something not generally done by the composer. It is also done entirely recitative, which basically means sung dialogue; there are no arias. Recitative is not unusual in and of itself because it is somewhat required to tell a story, but that there are no arias is unusual. Even the horrible Usher House that I reviewed last year and was done (almost) entirely recitative had an aria. Just one, but it had one.

Having said all of that, Makropulos was fascinating, and I hate even bringing up Usher House, because there is no comparison between the two; there is only stark contrast. For one thing, the music in Usher was flat and droning, which created a rather monotone hum that was most appropriate for putting people to sleep. The music in Makropulos was driving and energetic and really carried the libretto, keeping it from becoming boring. Then there was the set design...

Well, forget Usher House; the sets for Makropulos were amazing. Huge. The set for act 1 was a library with something like a 20 foot tall ladder against the bookshelves which one of the performers climbed during the performance. [Interesting and morbid side note: During the first performance of Makropulos at the Met (back in 1996), just after delivering the line, "Too bad you can only live so long," the actor fell from the ladder and died later that evening.] During the open curtain intermission, you're allowed to take pictures, so I have this example of the scale of the set: 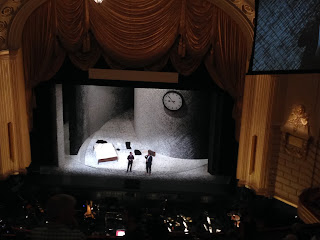 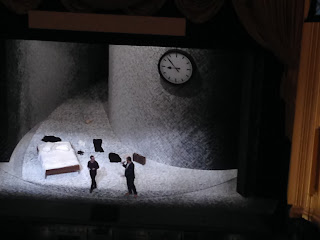 This is also one of those kinds of pieces where the lead really has to carry the production. There are plenty of other performers, but none of them are any more important than the next, so, if the lead is not dynamic, the whole production will fall apart. Nadja Michael played the role of Emilia Marty (or Elina Makropulos) like a cat trapped indoors. She draped herself across the furniture in odd ways and walked or crouched on it rather than the floor. She was quite excellent. All the performers pulled their weight.

I really enjoyed The Makropulos Case, and I would definitely see it again. It actually made me want to read the source material, which I would do if it wasn't a play. I just don't feel into reading plays at the moment. I may, however, pick up one of Capek's novels. That's a mark of a good production, I think.
Posted by Andrew Leon at 12:00 AM