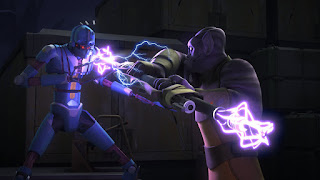 Mmm... What a classic opening for this episode. Right out of Empire. Infiltrators rather than probots, and, boy, are they tough! Sort of a cross between IG-88 and Grievous' bodyguard droids. Not something you want to meet in an alley, dark or not.

Our Rebel group has taken off for some kind of training thing and left Zeb in charge of the base. To be fair, they left Chopper with him to keep him company. If you can call it that, because they left him with... um... that other droid that Chopper befriended in that one episode. The Imperial droid that switched sides and now works as an organization and efficiency expert... and drives Zeb crazy. [All of the quotes below are from him, most of them directed at Zeb.]

That's the backdrop to the base being infiltrated... because Zeb brought the Infiltrator right into the base. Shenanigans ensue.
It's a very entertaining episode.
And it possibly contains an important plot point toward the end involving Thrawn. I guess we'll see how that plays out.

Mostly, the episode was one of those character study kind of things. Or relationship studies. It was about Zeb, but it was also about AP-5 (that other droid; I looked it up). Chopper was the third wheel, so to speak, but he played his own part. Not an essential episode (maybe?) but a fun one.

"Did they seriously leave you in charge of this entire facility?"

"Is that because you never learned to count? I can teach you."

"No, no, no. This is all wrong. Rations in the munitions section."