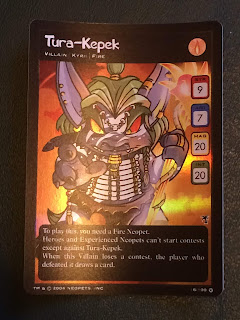 Not that I've mentioned it in a while, but I have this garage cleaning project going on. Possibly, "cleaning" isn't the correct word for it, since you can hardly tell anything has happened in it so far. I mean, I can tell, because I know what stuff I've sold, but I'm kind of making a bigger mess out of things as I go along. None of which has anything to do with what I'm about to get into other than reminding everyone that I'm in the process of selling off my old collectibles and, mostly, using eBay to do that.

Which tempts me to expound on all of the things that are wrong with eBay, but I'm not going to do that. After all, I'm making the choice to use them. Not that there are other feasible options, but, since there are other things that are like options (you know, in the way that people say carob is another option for chocolate or that tofu is an option for... anything), it's on me that I'm choosing eBay, so let's forget about the issue, for the moment, with eBay itself.

No, instead, let's talk about the users. Not all of them, of course, or, even, most of them. It has been, after all, quite a while since I've had... issues... with other eBay users. Then, of course, after going a year or so with no issues at all, I get three in the same month, the first of which we're going to skip due to it being typical opportunistic greed based on a late delivery by the USPS (which I've also had problems with just in the last month after having zero problems with them since I started using eBay again), which eBay, actually, took care of, amazingly enough, without me having to call them or anything. [Maybe there's some problem with June. The heat wave? Who knows.]

However, the other two are a different story and cut from the same cloth, so let's talk about them. I'm sure there's a metaphor in here somewhere. [Actually, I know that there is; I'm just not sure, yet, whether I'm going to point it out or not.]

A lot of my collectible stuff is pretty, I'll call it, mainstream. The greatest bulk, by volume, is comic books, and most of those are Marvel. By piece count, I have more Magic: The Gathering than anything else. Some of my stuff, though, is a little less... usual. Generally, because it's gone out of production so younger collectors, unless they fall into the niche, don't know about the stuff.

Some people, evidently, refer to these as "dead games." Well, the things that are games, anyway.
I also have stuff like this: 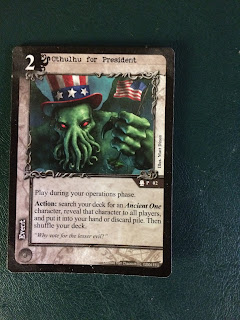 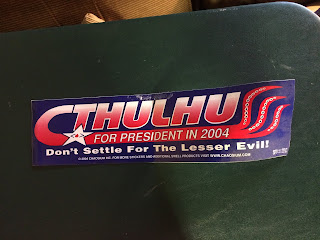 (Who would know he would "win" in 2016? Actually, I'd rather have Cthulhu than the current #fakepresident.))

Within the last week or so, I began listing some "dead games": L5R (Legend of the Five Rings) and Neopets, both ccgs (that's collectible card game for those of you haven't lived any in the last couple of decades), though Neopets calls itself a tcg (trading card game). It didn't take very long before I was contacted by buyers interested in the two games (one for each game) if only I would lower my price to next to nothing so that they could buy my stuff. You know, to garage sale prices.
You know about garage sale prices, right? Everything for a $0.25.

Let me be a little more clear about that. Both buyers wanted to "buy" all of what I currently have available on both games at prices that clearly didn't represent the value of the items. Now, I don't have a problem with people trying to get a good deal; heck, I like good deals! So I don't have an issue with people asking me if I would consider lowering my price on something. What made these two stand out is that when I turned down their offers as being too low, they both got mad at me and began arguing with me, both using the "dead game" argument and telling me how I would never find a buyer willing to pay more than they were offering.

That is the reason my mom married my stepdad, just by the way. According to her, no one else would ever have taken us.

To make matters more interesting, the guy who wanted the L5R stuff kept going on about all of the places he knew of where he could get what I was selling at even lowere prices than what he was offering! And, so, why was he trying to talk me down rather than just buying the stuff for the EVEN CHEAPER PRICES?!? I guess he was doing me a special favor or something by offering me more than what he would have to spend elsewhere. Riiight...

And the guy who wanted the Neopets stuff? Well, somewhere in arguing with me over the price, he let slip that he was interested in re-selling it. Hmm... Re-selling the "dead game" for a profit, which I shouldn't expect because it's a dead game. Later in the conversation, he tried to recant that and tell me he was just offering an example of why someone might want to get something for no money. It made me want to LOL in his face. Which is difficult to do online.

At any rate, to make a long story short, before I even got the L5R auctions posted, a different buyer, one who had purchased some other L5R stuff from me many weeks ago, made me an offer he was worried I wouldn't take (he thought I would think it was too low (but it was what he could afford)) that was for only about half of what I was going to put on auction but at more than double the price the other guy wanted to offer me for all of what I had. The new offer was actually a bit lower than what I wanted, but it was a reasonable offer for a good chunk of stuff that I would no longer have to list on eBay. I took it.

And the Neopets stuff? I did post all of that and, within 12 hours of posting it, had already made more on just a tiny fraction of it (less than 10%) than the "dead game" guy was offering for all of it.

Do I have a lesson in here for you? You decide.
What I will say, though, is don't listen to anyone who is trying to get you to do something with the "dead game" argument. 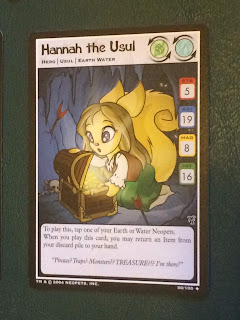