This Land Is Their Land (a book review post) 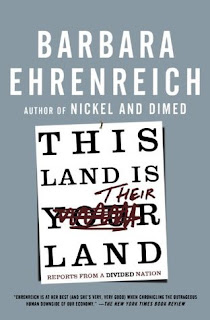 I'm going to say right up front: This is probably not a book you should read.
Wait, let me revise that: This is not a book you should read if you haven't read any other books by Barbara Ehrenreich.
Also: This is not a "book." It's a collection of essays.
Funny story: I didn't know that when I started reading it. Having read many other Ehrenreich books, I was more than a little thrown by how disjointed this seemed... until I realized that it was a collection of essays, then it made sense.

The other drawback is that the book is 10 years old, and there are moments when that is readily apparent. Beyond the fact that she's talking about the Bush presidency, that is. There are some things that have dropped out of the national consciousness since the book was published, which can leave you wondering why that was even something being talked about at the time. Like the attack on Cabbage Patch dolls back in the 80s by Right-wing nutjobs. Not that that is in the book, but it's one of those things that, when you look back at it, it leaves you scratching your head "why?!?!"

That said, this book still has a point to make, and it's a point that needs to be made again and again until people realize they need to do something about it rather than wait for someone else to fix it for them. Especially since the someone they are hoping will fix the problem are the very ones who are the problem: the 1%.

Unfortunately, the book will also highlight for you many of the ways we are regressing back to all of the places we were 10 years ago. Like, say, health care. Which got better for a brief period with Obamacare but, which, now, is being killed slowly by Trump (#fakepresident) and his goons. Or, say, banks...

Look, "we" put Dodd-Frank in place to prevent banks from doing things like they did that caused the economic collapse a decade ago. You do remember that, right? It was so bad that people were just walking away from their homes. You haven't forgotten, have you? The answer, or part of it, was Dodd-Frank. Of course, the 1% want to be able to bleed everyone else for as much as they can get, and they don't much like regulations which protect the consumer so, again, Trump (#fakepresident) and his Republican death machine have undone much of what was put in place to protect everyone else.

Actually, when you look at what happened there with the banks, it's like they were merely put in a time out. They had a club they were beating on people with and had it taken away from them and told to go sit in the corner. All the Republicans went to go play in the corner with the banks until they could maneuver the club around to someone who would give it back to the banks. It's all really rather sickening and the sheep who make up the people who vote for Republicans and who can't see beyond the dog-whistle words of "abortion" and "guns" will contentedly continue to gnaw off their own legs rather then open their eyes and look at what's being done to them by people like Paul Ryan, Mitch McConnel, and the ever-blazing Trumpster fire who thinks he's a president.

Yeah, okay, none of that last paragraph was in the book, because it was written more than a decade ago, but there are sections of the book that really resonate with what's happening right now, especially since Dodd-Frank is being dismantled right now, so you can see the return to the things she's talking about in the book.

Anyway... If you've read other Ehrenreich books and enjoyed them, you'll probably find this a good read. Besides, it's quick, especially if you read it as bites of essays here and there. If you haven't read Ehrenreich, go get a copy of Nickel and Dimed or Bright-sided and start with that.
Posted by Andrew Leon at 12:00 AM