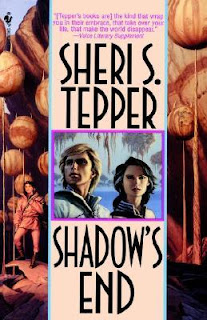 This is the third Tepper book I've read, and I'm beginning to sense a pattern. A pattern not in the stories themselves but in the themes. Of course, this is only the third book of hers I've read, so I could be completely wrong and what I'm picking up on could be isolated to only these three books (well, probably not just these three, because there are still two more books in the series with Grass, and I suspect the themes from the first book will carry into the other two); however, until proven otherwise, I'm going to go with these as common themes throughout her books:


Actually, let's throw in a fourth: apocalypse. Each book has dealt in some way with some sort of apocalyptic happening.


Shadow's End has an interesting perspective. It's a third person story told via first person much like, say, the Sherlock Holmes stories are told by Watson. This used to be a pretty common way to tell a story (see also The Strange Case of Dr. Jekyll and Mr. Hyde and Moby Dick among others), but we moved away from that as a society throughout the 20th century until, now, it's hardly ever used at all. It's a style that I like and find much more appealing than the glut of straightforward 1st person stories coming out over the last couple of decades.

The person telling the story tends to be someone who is mostly an observer, rarely taking direct action in the plot, as is the case in this book with Saluez. This allows a much more nuanced telling of the story, as you get, also, the perspective of the person narrating. I think it provides a much more flexible method of telling a story.

One of the ideas explored in this book is that of invisible people. I don't mean invisible people; I mean people who go about unseen. Saluez is one of these people, which makes her role of observer/narrator work quite well. There is a parallel here to, say, the maids at hotels being invisible people. I'm sure it's not an accident.

I really enjoyed the beginning of this book; well, I enjoyed most of this book. The exploration of the Dinadhi people was really quite fascinating, and the book pulled me along as the story progressed. However, I was not fond of the ending, about the last 10% of the book. I don't really know much about Tepper other than that she started writing after she had retired from whatever it was she had done all of her life and that I've read three of her books. So, not knowing anything about the way she wrote, this books feels as if she wrote herself into a place that she didn't know how to get out of.

I don't know; maybe, she's like me and pretty much knows the ending before she starts writing the story, which would mean the ending was what she had in mind from the beginning, but it didn't feel that way. And it's not that the end is bad or anything; it was just... unsatisfying.

It's not enough to dissuade me from recommending the book, though; it's just not the Tepper book I would say you should start with if you're going to check out her books. Go get yourself a copy of The Gate to Women's Country and give it a read.
Posted by Andrew Leon at 12:00 AM