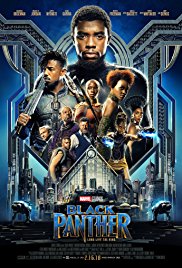 I'm not going to try to make a "best movie ever" case for Black Panther. It's quite an excellent movie, but there are movies I think are better, even other Marvel movies, for whatever reason, though Black Panther rather solidly lands in my top five from Marvel. It's hard to argue "best," at any rate; it's too subjective. It's too favorite.

That said, I think Panther may be the most significant movie since Star Wars, and I think, from a cultural standpoint, that Star Wars (I am talking A New Hope here) has been the most significant movie ever made. Initially, the perspective on Star Wars was merely that it had changed the way movies were made, and it certainly did that; however, Star Wars has become a part of the cultural zeitgeist in a way that no other movie ever has, including supporting the Boomer viewpoint of technology being dangerous and suspicious and untrustworthy. Trust the Force, not your targeting computer.

The thing about Star Wars is that it was different. Not just the technology behind it, but the appeal of the story. And let's not forget the irony of a movie using cutting edge technology to tell a story about the evils of technology and how we all need to get back to our mystic roots. Feel the Force. The story also appealed to a more basic... instinct, the heroic lure of the young male. It was all about how you could make it on your own if you just... trusted. Trusted yourself. Trusted fate. The Force. God. Whatever it is that is bigger than yourself that wanted your success despite your own efforts to derail it. It was different, and it helped to bring about a new cultural viewpoint that elevated the self above all else. Or, at least, it reinforced that Boomer self focus and made it seem not just okay but preferable.

Look, I get it. I get that a lot of you out there don't understand what the big deal is. When Star Wars came out, my grandmother (who took me to see it) didn't understand what the big deal was either. As a movie, all on its own, isolated, Black Panther doesn't cover any new ground. The special effects aren't anything special, which is not to say that they're not spectacular; they just don't do anything new, but, then, I have a hard time seeing how we're actually going to see anything new in special effects any time soon.

The real effect of the movie is the nearly all black cast, and that is an amazing thing. Sure, yes, I get that there have been other movies with all black casts and you can't figure out the big deal. What makes this one different? Unfortunately, if that's a thing you can't see, I don't know how to explain it to you. You just have to realize that it is different and accustom yourself to the idea that things may change. Things may change in the way movies are made, and things may change culturally. Not right away, sure -- it did take 20 years for the full effect of Star Wars to start being felt -- but eventually.

Which brings us to the story of the movie, the Make Wakanda Great Again conflict. The conflict of the movie is reflective our current societal conflict and whether or not you should support your country even when it's doing the wrong thing, as if it's some all or nothing choice (as the Republicans seem to believe). This is all summed up in one very powerful exchange which goes something like this:
"If you love your country, you will serve it."
"I love my country so I will save it!"

Speaking of power, I believe the most powerful moment of the movie is possibly overlooked due to how understated it is. So as not to present it in a spoilery way -- but, if you've seen the movie, you should understand the part I mean -- I'll say it this way:
An old white man looks at T'Challa and says, basically, "What do you, a black man, have to offer that can possibly be of interest to us white people?" Yes, I know that's not what he said, but that was the context. It's what white men have been saying to black men for hundreds of years. To all people of color. As Black Panther shows, people of color have more to offer than we can imagine. We just have to give them room to do it.
Posted by Andrew Leon at 12:00 AM