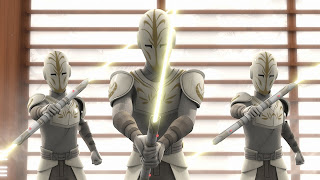 A note before I start watching this episode:
I always pull the image for whatever episode I'm about to watch before I watch the episode. It's a bit of a teaser for the episode in question, but, usually, the images are fairly innocuous. You know, Ezra or Kanan standing with a lightsaber or something. Oh, but not this episode! This episode gave me the above image, which is hella cool! AND this episode has Vader and Ahsoka! So, yeah, I'm stoked for this one, so I'm going to go watch it now.
And, no, I don't know who those guys are in the image above, but I certainly want to find out!

After watching:
The guys in the picture? Jedi Temple Guards. So cool...
Evidently, the Grand Inquisitor was a fallen Jedi. And, possibly, a Temple Guard. That's probably a bit of a spoiler but not so much of one that I feel bad about saying it.

This is a big episode. Ahsoka, Vader, Yoda (yes, Yoda!), and, even, Anakin. Yes, Anakin is Vader so, of course, Anakin, but it also has Anakin before he was Vader. Let me explain:
Ezra walks in on Ahsoka watching old training holograms that Anakin had made. We find out that Ezra uses them for his training, and Ahsoka tells Ezra about Anakin as she knew him, not as the most fierce warrior of the Clone Wars. It's a very touching moment.

I really loved this episode.

I am reminded again how different this series is from Clone Wars. The very best episodes or story arcs in Clone Wars were the ones that dealt with questions, usually moral questions, but Rebels really doesn't have that. There is little to no moral ambiguity in this series. It's all about putting together a resistance movement against the Empire. It's, generally speaking, an action/adventure show. Also, there are no story arcs. Each episode is self contained. And, while I am enjoying Rebels, I miss the deeper questions that Clone Wars asked and seldom answered. The only real question we have in Rebels is whether Ezra will turn to the Dark Side or not, a question, actually, that this episode touches on.

Anyway, it leaves me feeling like my reviews for this series are nothing more than plot synopses, and I hate doing plot synopses. Anyone can do a plot synopsis.
Posted by Andrew Leon at 12:00 AM