Licked by a Horse, among other Things 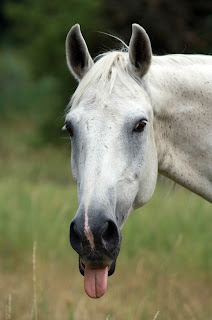 Well, this is awkward.
Sure, it's an awkward of my own choosing, but that doesn't make it any less awkward.
We're going to talk about being licked.
And I'm going to assume that everyone, at some point or other, has been licked by a dog. Yes, I'm sure there are people out there who have never been licked by a dog or who think it's gross or whatever, but it's a fairly normal thing, so we're going to go with that. 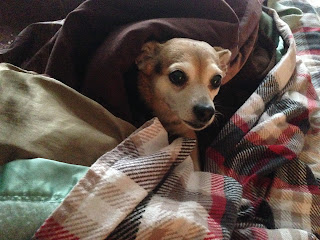 Isn't she the cutest.
Yes, that's a statement, not a question.

Along with the dog, however, I've been licked by quite a few other kinds of things.

There are, of course, humans. Anyone who spends any amount of time working with young children is, at some point or another, going to be licked. Usually because said kid finds it utterly hilarious. Especially if he catches you off guard and you suddenly have a smear of slime down your arm. Yeah, hilarious. Right?

But for most animals it's to show a kind of affection, not to be obnoxious. It's a "here, I care about you; I'm going to clean you," or whatever, kind of thing. Of course, some dogs love everyone. heh Or just aren't very discriminating.
Anyway...

So... other animals I've been licked by:

My cat. Being licked by a cat is not the most pleasant thing, but he means well. As well as a cat can, anyway. I've been injured more than once by the cat's tongue, though, so I've had to dissuade him from licking me when it looks like he's settling down to give me a grooming.

My rabbit. She's no longer with us, but she used to lick my hands and fingers when I would hold her. It's somewhat similar to being licked by a cat by softer and more tentatively. I did some research on the rabbit licking thing at one point because I'd never heard of that before, and it seems to be rather rare with them. They have to really like you.

A gerbil. When I was in high school, I had a pair of gerbils and the female would sometimes lick my fingers. It was a little weird, kinda of like being nosed by a fish. Sometimes, she would hold onto my fingertip while she was licking me.

A cow. When I as a kid, my grandfather had cows down on the farm, and one of the cows, a cow named Pig, would occasionally lick me. I don't know if she ever licked anyone else, but I'm sure it was all about getting food. At any rate, I don't recommend the experience. If you want to know what's like, go find a cat and get it to lick your arm, then imagine that on the magnitude of a cow's tongue, let's 100x more intense. Plus the slime and what it did to the hair on my arm. Let's just say that there's a reason a cowlick is called a cowlick.

And, now, a horse. Or a pony, as was the case. The pony's name was Lucy; I wish I had taken a picture of her, but it didn't occur to me until after the fact. We were at one of the local parks a couple of weekends ago, and they offer pony rides there. My niece and nephew wanted to ride the ponies, so I was hanging out near the fence where the waiting ponies were and one of the ponies, Lucy, started nudging at me, for scratches I guess. That's how I responded, at any rate, first up around her ears then her nose. It's not like a horse is able to scratch its own nose, right?

A surprising thing happened, then; Lucy licked my hand. Except it was more like a tongue press. She pressed her tongue against my hand. I want to say it was like being touched by a cloud, but I don't think that analogy really works. Let's just say it was soft, surprisingly so. Gentle, maybe. So I held my hand out to her like I would for a dog to smell, and she began licking my hand repeatedly. You know, pressing her tongue against my fingers over and over again.

My younger son was with me, so he held his hand over to her (he had been scratching her ears), but she turned her head away from his hand. She was definitely choosing to lick my hand, so it wasn't that I had tasty food on it or something (we had just finished eating), because my son had had the same lunch I had so would have had the same food on his hand.

After a few minutes, I had to go take care of something, but I went back over to see Lucy again a little while later, and she got all excited when she saw me walking up and greeted me by licking my hand again; she still wouldn't lick my son's hand. When they came to take her away a little while later, she got upset and didn't want to go.

I don't know how common it is for horses to lick people (and I'm not going to do any research about it, because I'm not curious enough to spend the time on it), but it's not a thing I'd ever heard of before. I seem to have a thing with animals, which, actually, is true enough.