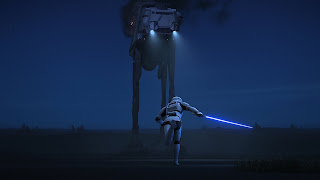 -- In our position, you take what you can get, Kid.

Fuuuuuccck! When the Empire deploys AT-ATs, they just drop them! They DROP them! That explains the legs on them, I suppose.

My son couldn't buy it, though. Me, I was willing to give them that one. It was when Kanan -- see picture above, which is really cool -- went running at the AT-AT with a lightsaber THEN cut right through its legs (yes, two of them!) as if they were butter that they lost me. I mean, they had just dropped the AT-AT from a spaceship and the legs had supported the drop! But Kanan can just slice through them as he runs by? I don't think so. Go back to Phantom Menace and how long it took Qui-Gon to cut through one of those doors on the Trade Federation ship. Oh, wait! He wasn't able to do it in time. AT-AT legs have to be at least that tough.

This episode features a certain princess, and it's a pretty decent episode. You know, except for the bit mentioned above and that Leia seems to be unable to connect with people. Hmm... Actually, I suppose that's just Leia, so it makes sense when Kanan tells her that she should talk to Ezra because she understands what it's like to be young and have a lot of responsibility that she kind of just fails at that.

This is Leia before she's a senator. At least, that's what I'm assuming because her father is the senator from Alderaan. It's interesting to see her from this perspective, but it's more interesting to see the Empire's view of Alderaan. It gives a little insight on why Tarkin becomes so willing to blow it up.