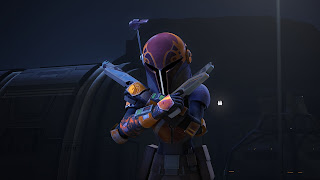 -- "It looks like diplomacy won the day for once."
"There was a time when it always won the day."

You know, the dialogue in this show is pretty good. I always come away with more quotes than I can use. Well, almost always. This episode was one of those episodes where there were a lot of great lines.

I would say that you should just watch this episode even if you're not a fan of the series, but I'm not sure this episode is one of those that would work without the background. To really appreciate it, you need to have watched Clone Wars, but they fill in just enough of the details that you don't have to have watched Clone Wars, but my "OMG!" is exactly because I have the Clone Wars background to know what stuff means.

Though this episode is exactly centered on Sabine, it does reveal more of her background, and, as I've said before, it's always a good thing when they give the female characters a bit more focus. They can't just be cardboard stand-ups for Ezra and Kanan to act in front of.

"This Jedi philosophy stuff doesn't work for everyone."
"That's why we're at war."

"When you set your mind to something, you're kind of frightening."
Posted by Andrew Leon at 12:00 AM