Four Months, Give or Take, Later

Some of you are probably aware of the fires we had around here last October, followed not long after by additional devastating fires in southern California. The fire here, though, the fire where I live that destroyed nearly 3000 homes, about 5% of the housing stock in an area that was already in crisis due to lack of affordable housing, has gone down on record as the most destructive fire in the history of California. I wrote some about it back when it happened, but those posts have all been taken down, now, and collected here: 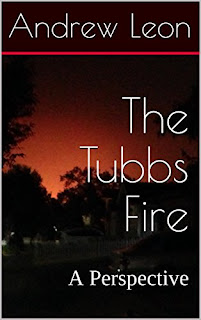 There's some additional stuff at the end that wasn't on the blog, because why not, right? Anyway... Here's the part where you get to show support for your "local" (online is local, right?) indie artist. Yes, writers are artists. If you read the posts back when they were live and you enjoyed them, pick them up now to show your support for the artist who wrote them. I mean, come on, it's only a buck! (I'll take that as jerky, please. (Kidding! Bad joke.)) Plus! For your $1, you will get the added political commentary at the end, and we all know how much you like that!
Posted by Andrew Leon at 12:00 AM