We do a lot of food exploration at my house. I mean, we experiment with cooking a lot in our house. For many reasons.
Like, the Indian restaurant we really loved closed, and we don't think any of the others in the area really come close.
Or my wife doesn't like pizza from restaurants, so we need to figure out our own pizza at home.
Or, gee, enchiladas are really hit-or-miss, maybe I should figure out how to make them so that we don't have the problem of bad enchiladas (which is what I did during January, and, now, we can't go buy better enchiladas than what I make at home).

Sometimes, when we're doing these food projects, we discover that there really is no one way to make something. That's true of everything, actually, but it's more true of somethings than others. I mean, pizza, despite the different toppings and thickness of the crust, is still basically pizza. It's bread and sauce and cheese at its heart; everything else is just window dressing.

But tagine... Tagine is not like that at all.

A couple of years ago, we decided to explore Moroccan food, and we started with tagine, because that seemed to be a pretty standard Moroccan dish. With Indian food, you start with curry; with Moroccan, you start with tagine. What I learned very quickly is that there is no one thing that is tagine. It was kind of mind boggling.

I mean, sure pizzas can be very different from one another but, if you see a pizza, you're going to know it's a pizza. Going through recipes for tagine, though, if I hadn't known I was looking at tagine recipes, I might not have been able to tell that two different dishes were both the same thing.

Except for the chicken. Tagine tends to have chicken.

And that's kind of how racism is. It doesn't all look the same, sometimes to the extent that you can't tell that what you're looking at is racism. Even in yourself.

We tend to think of racism as hate or, at least, an extreme dislike of a certain set of people, like, "I hate black people," or, "I hate Muslims," or, well, I'm sure you can figure it out. This is the burning crosses in people's yards or the dragging them from their homes and lynching them or the crowding them into ovens and gassing them kind of racism. But it's also the kind of hate that prompts torch-wielding mobs (even tiki torches) to march through towns and college campuses proclaiming how great they are. It's all very obvious and in your face, and, generally, we, culturally speaking, are quick to condemn it.

In fact, they may even like that other group of people and feel... fondness... for them. It's like this:
Some people really love kids. Little kids. They think they're great and want to play with them and do things with them and take them exploring and teach them and all of those kinds of things. They want to assist them in becoming adults because, right now, kids aren't as good as adults. But, maybe, one day, they will be. You know, assuming someone takes them in hand and guides their paths and helps them to become all they can be.

Sometimes, that's what racism looks like. "These other people aren't as good as us, but we can take them under our wing and teach them all about our ways and our religion and, maybe, one day, they can become all that they can be. But, until then, they need to be know their places as the inferior, the loved inferior but still inferior, and learn how to be better. The kind of racism of Robert E. Lee when he said god gave the Africans to the white man so that the white man could help them learn to become better people. [Yes, I'm paraphrasing.]

I think we often forget that racism can extend into being benevolent overlords. It's all for their own good, you know.

It's important to remember this stuff when people like Trump (#fakepresident) and Sessions claim to not be racist. I believe that it's possible that they don't feel racist because they don't feel whatever level of hate it is they believe is necessary to be a racist, but racism is not just hate flavored. It has a lot of flavors and a lot of ingredients. Sometimes, you can have two kinds of racism standing side by side and only recognize one of them, the one full of hate, and forget all about the one full of only white supremacy (and Anglo-American heritage).

I don't care how you feel. 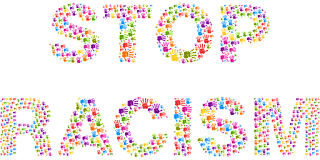