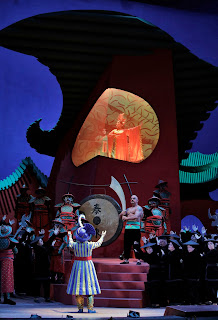 The 2017 opera season is underway. This is a short season, only five operas which will all be presented this year, but that's because the San Francisco Opera is presenting Wagner's Ring Cycle next summer! I can't wait. This is such a big deal that we had to purchase the tickets for it LAST YEAR. I have almost an equivalent anticipation for this as I did for The Phantom Menace or Raimi's Spider-Man. But none of that has to do with this opera, so let's get to that.

Turnadot was Puccini's last opera; in fact, he died before it was finished. That he died is just part of what makes this particular opera problematic and, often, controversial. The ending most often performed is by Franco Alfano and was written from Puccini's notes; however, that did not keep it from feeling inauthentic to me, not least of which was because the ending is happy. I'm not saying the ending wasn't good, and Puccini may have intended a happy ending for this one, but it didn't feel quite right to me. It's not really what he's known for.

That said, the opera was amazing. Turandot contains one of the most famous arias in all of opera: "Nessun dorma" or "None Shall Sleep." In the role of Calaf, Brian Jagde (seemingly becoming the SF Opera's tenor De Niro) performed it admirably.

The other big issue with this opera -- skipping over the issue of the name and the disagreement about how it should be pronounced -- is the... Well, I don't know if it's accurate to call it racism, but it certainly caricaturizes the Chinese. In fact, the opera was banned in China for a while because of it. But, then, the opera is kind of a cultural muddle, for which there are reasons of a sort, but you can look up the origins of the story on your own if you want to know about them.

At any rate, seeing that we are much more culturally sensitive these days than people were in the 1920s, and rightfully so, the San Francisco Opera staged it as a fairy tale. Of sorts. Which has a basis in the original story, so it all works out.

With that in mind, the sets were amazing! I mean, they were seriously amazing. I've commented previously about how great some of the sets have been at the SF Opera, but I think Turandot has had the best set design of any opera I've seen. By far. It was almost like watching a dream. Especially the scene during which "Nessun dorma" is performed. It was like a fairy forest with a bridge... Well, it was really great.

And the costumes were also really good, especially Turandot's. Actually, a couple of her gowns rivaled the sets.

The only possible negative I have about this presentation is that there was actually a lot of that whole standing and singing thing. However, possibly due somewhat to the richness of the sets and that, often, there were background chorus people milling around, it didn't often feel that way, and, when it did, it felt more natural.

This production of Turandot is definitely one of the best operas I've seen so far.
Posted by Andrew Leon at 12:00 AM