The Dream-Quest of Unknown Kadath (a book review post) 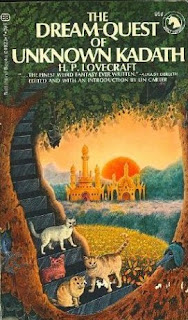 You want to know how you can tell how good or bad a book is? By how willing I am to spoil it. If it's good, I'm going to do my best to keep as much of the book to myself so that you can have full enjoyment of it but, if it's bad, I'm going to give you every reason not read it, which is going to include giving away anything about it that I think will help you to understand why you shouldn't read it. So, yes, there will be spoilers. And... now, I feel bad for even warning you about that because what if you decide to stop right here and not read the review? Seriously, you don't want to waste your time on this one, and I'm going to tell you why.

The first thing you should know, though, is that when an author says about a story, "It's not very good," you should probably believe him. Not that I knew he'd said that before I read it, nor would it have kept me from reading it since I'm doing this whole "complete works of Lovecraft" thing, but at least I would have known going in. Actually, I think Lovecraft was being generous when he said "not very good."

Mostly, the story is just boring. Mind-numbingly boring. And long. Especially for Lovecraft. And, since I'm reading this on my Kindle and it's part of a collection, I didn't know how long it was when I started it, and it kept going on and on and nothing was happening and I couldn't read it without my mind wandering or falling asleep which meant I had to go back and re-read parts of it, not that those parts mattered because none of it ultimately mattered.

More interesting, though, is the fact that Randolph Carter, the protagonist, is a character based more than a little on Lovecraft himself. You'd think that if you were writing a story with you in it that it would be a tad more exciting and interesting. Or that the character would do something. Anything. Other than get captured and have to be continually rescued, passively, by others. Including an army of cats because Carter had happened to have been nice to a cat at some point prior to needing to be rescued.

So the idea here is that Carter has had a dream of a place he calls the Sunset City -- Randolph Carter is an expert at dreaming, evidently -- but, each time he dreams of it, the dream gets snatched away from him. Carter decides it is the gods of Earth doing this -- they live in the land of dream -- and, so, he decides he is going to seek them out in their city of Kadath, a place where no man has ever been.

The bulk of Dream-Quest is Carter travelling through the land of dream and descriptions of the places he's seeing. There is no dialogue in the entire novella. That can be okay in a short story, but it's difficult in a novella. There is a monologue near the end and, when the character began speaking, I got excited for a moment, only to realize that the character was just going to be monologuing. It was sad.

One of the things Lovecraft says about the story is that he worried whether there was so much creepy stuff in it that it all blended together and made everything mundane. He was right to worry. Especially since Lovecraft relies so heavily on not actually describing his monsters. You can only tell me so many times that something is nightmare-inducing before I quit believing you. Especially if you tell me that same basic thing about every creature you come across. All of which is made worse when Lovecraft introduces you to some deadly horror that wants to eat you on one page but, then, becomes your ally a few pages later because you happened to learn a bit of its language.

You might be wondering at this point why I finished this story at all, which would be an entirely fair question. The easy answer is that I'm doing this whole "complete works of Lovecraft" thing, and you can hardly claim to have read the complete works if you dump stories here or there because they bore your eyeballs out (take that however you want to), but, also, I did genuinely become curious as to whether the story was going to go anywhere.

And it did. Sort of. I mean, Carter does eventually make it to Kadath. Very eventually. But that's the only interesting part of the story. See, when Carter FINALLY arrives in Kadath, the unknown city of the gods, to demand that they allow him into his Sunset City, he finds them... not there. The city is abandoned. And, as it turns out, as we find out through the monologue of the -- well, I suppose he's the antagonist, but I hesitate to go as far as to call him that -- "bad" guy, the gods loved Carter's dreamed city so much that they have taken it for themselves, abandoning their positions as gods of the Earth so that they can hang out in Carter's dream city. However, the one little interesting bit is not worth the whole story.

And there's not much after that. Carter escaping again through virtually no action of his own, though it is the only time he's responsible for his own safety. The payoff, which is very small, is definitely not worth the length of the story. And I haven't even mentioned how many times the word "Cyclopean" is used.
Posted by Andrew Leon at 12:00 AM