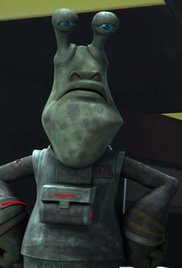 -- You must trust in others or success is impossible.

His name is a joke, by the way. I suppose I could have mentioned that earlier, but it doesn't make it any better. It means "braggart," basically. One who believes himself to be more (bigger) than he is, which is why he's small, to exaggerate the point. heh

On its own, this episode might not be so bad but, after three episode of Gascon, this one already starts with really low marks. Especially since it starts by making a point of Gascon's worst quality (yes, even worse than talking big all the time), that he never does the right thing unless he's forced to. He wants glory without the effort. So, when Gascon and droid company find themselves on a booby trapped ship heading toward a Republic security conference, Gascon's first impulse is to abandon ship and allow the bomb-laden vessel to travel on to its destination. It's only when he finds he cannot get off the ship that he decides he needs to do something about the fact that it's going to blow up.

Of course, it's R2-D2 who really does all the work and, yes, saves the day, but he couldn't save this story arc.
Posted by Andrew Leon at 12:00 AM