Truth, Justice, and the "American Way" 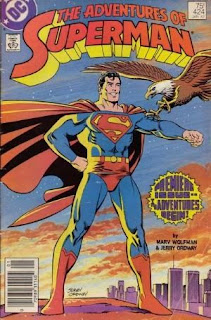 No, this is not a post about Superman. Except, maybe it is a little bit. Or a lot.

"Truth, justice, and the American way," as a phrase, has been around for long enough at this point that people don't realize it originated with Superman. They may know it's been associated with Superman but most people think it's its own thing, not what amounts to a marketing phrase for the 50's Adventures of Superman, the Superman show I watched in syndication when I was a kid.

I'm not sure if there was an idea tying truth and justice to America prior to Superman (and I'm not doing the research on that, right now, to try and figure it out),but Superman, since his inception, has been tied to truth and justice. From the early days of the comic book to his days on the radio and, then, in the earlier TV series, Superman always stated that he was here to fight for truth and justice. That's all, just truth and justice. Those, to me, seem like things worth fighting for. I'm not so sure about the "American way."

See, the "American way" was something tossed in during the 50s in the midst of the Red Scare and McCarthy-ism and was less about America than it was about White America: Leave It To Beaver, white picket fences, and Father Knows Best. Probably some Andy Griffith, too. TV in the 50s was all about the "American way," and it's hard for me to dissociate that idea from those TV shows because they epitomize so much of the idea of the "American way."

And I'm not going to try and say that there's nothing attractive about those shows and the, for lack of a better word, ideal they put on display. But it was all a fantasy. Real life America was never like Father Knows Best or Mayberry. Real life America has never been all White all the time in nice little subdivisions with white picket fences. And it's never been about women who wear their heels and pearls in the kitchen while making dinner all day. All of this isn't even a White fantasy; it's a White Male fantasy about how everyone else lives to serve them in their own individual little kingdoms.

It's kind of sick.

It's possible I wouldn't have a problem with the whole "truth, justice, and the American way" thing if truth and justice were a part of it, had ever been a part of it. But the "American way," as it applies here, has always been about white male supremacy. It's why Steve Bannon holds the 50s up as his ideal era of what we need to get back to. The White Male was supreme, and everyone else knew their places.

As for truth and justice? We seem to have culturally abandoned those ideas of late. We've abandoned truth in favor of opinion and, even, outright lies. You can see the evidence of that in the man who was elected president, a man with absolutely no relationship with truth whatsoever. His lackeys display the same break from reality with their "alternative facts" and misrepresentation of historical accuracy. Sorry folks, history is not an opinion. Things happened. Saying they didn't or trying to recast those events in some other light doesn't make them not have happened.

And we've abandoned justice in favor of racial prejudice and allowing the rich more and more power and money. "We" have allowed the Republicans to wave religious dogma at Conservatives to keep them in power so that they can continually enable corporations the ability to take advantage of people, poison their water, and keep them in debt. That Jeff Sessions and Neil Gorsuch are where they are serve as proof that we have shoved justice down the stairs and broken her scales. We have become the money lenders in the Temple, and have elected the worst of them as president.

This seems to be the "American Way": no truth, no justice, just the dream of white picket fences in white neighbors with white schools.

Superman isn't coming. It's time to abandon this "American Way" nonsense as the fable it always was. It's time to stand for truth and justice. Truth and Justice! Which means demanding, all of us, that we have politicians who are knowledgeable, smart, and believe in facts, not money. It means demanding a change to the system so that the system doesn't check our skin color before it decides who gets a fair shake. It's time.
Posted by Andrew Leon at 12:00 AM