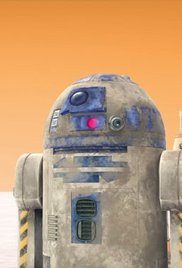 -- When all seems hopeless, a true hero gives hope.

So... Whereas I was okay with one episode with this special droid team led by Colonel Gascon (the frog "general," just as a humor break or whatever you want to call it, I find myself less interested in a whole story arc surrounding this idea. Especially one that begins with an overly contrived shipwreck. Seriously? The piloted their ship through a comet cloud? They have four (FOUR!) astromech droids on this team and they piloted their ship into a cloud of comets and crashed?!?! Come on! At least have them damaged in a dogfight or something trying to escape. That would have been plausible and believable.

But, not only that, but the pilot droid, THE PILOT DROID!, seems unable to come to a decision to avoid flying into the comet storm and goes off to make conversation before alerting Gascon, at which point it is too late to do anything about it.

Which leaves them crashed on a void planet.

Basically, I didn't find anything of real value in this episode and, actually, I don't remember finding anything of value in it the first time I watched it. In fact, I had completely forgotten about "A Sunny Day in the Void," the title being the best thing about the episode (other than a couple of good one-liners), and had a sinking feeling as soon as I realized which episode it was.