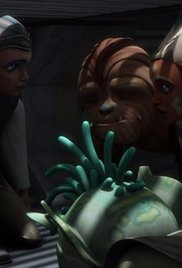 -- The young are often underestimated.

It's important to remember that Hondo is a pirate. Of course, he's a pirate in the same vein as Han Solo and Lando Calrissian: a charming rogue. It makes it easy to be taken in by him, characters and viewers alike. But, then, he does something every so often to remind us he really is just a pirate. It doesn't matter how "presidential" he sounds during his not-the-state-of-the-union address, he's still gonna cut your throat for profit if he thinks he's going to make some from doing it. There is no, and there never was, doing the right thing. He just fools you into thinking that when he's making money by being nice to you. But it all comes down to, "We all know how much I like to be rich, don't we?"

In the end, it makes Hondo no better, and possibly worse, than Anakin during and after his fall.

And this is how bad it is:
During the conflict when Hondo is obviously and blatantly trying to kill Ahsoka and those under her charge, Ahsoka says to him, "I don't want to hurt you." And she doesn't. Do you know why? She likes Hondo, just like we do, because why? Because he's a charming rogue, and you can't help yourself. Even while he's trying to slit your throat. Hondo's response? "I know." That's not a direct quote, but it's the spirit of it, and it gives Hondo the edge.

Oh, yeah, Honda is in this episode.

And David Tennant, my second favorite Doctor. Oh, no, not him, just his voice, but that's good, too.