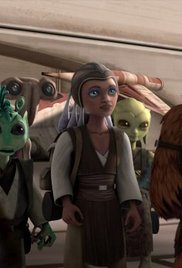 -- He who faces himself, finds himself.

Okay, on a complete aside, why does it seem that "everything" has to have an episode (or some equivalency) called "The Gathering"?

There's a decided shift in season five away from Anakin and Obi-Wan to Ahsoka as we begin our second arc of the season focused on Ahsoka and her development apart from Anakin. Which is not to say that there won't be Anakin and Obi-Wan, just that Ahsoka is getting some extra attention as the series nears its ending. But, you know, more on that later.

This episode is both kind of cool/interesting and kind of annoying. On the one hand, it's about how younglings acquire their Kaiburr crystals so that they can construct their first lightsabers and move on to becoming padawans. On the other hand, it has a bit of that video game quality to it where you have to pass a series of challenges to achieve the goal. It's not as overt as it could have been, though, which is why it's only "kind of" annoying.

Really, the episode is centered around the younglings and their individual challenges they have to pass in order to obtain their crystals, but Ahsoka is the one in charge of them, though Yoda is there, too.

It's a decent enough episode even if it's not as meaty as the last arc.

Also, I have to say, the wookie youngling is probably my favorite. I do like the Ithorian, too, though.
Posted by Andrew Leon at 12:00 AM