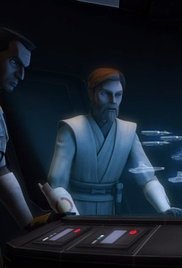 [Remember, you can sign up to join the Clone Wars Project at any time by clicking this link.][Well, actually, considering that we're into season five, now, probably no one new is going to sign up, BUT! Hop over to The Armchair Squid for his take on the current episode.]

Ahsoka got captured. My feeling is that this is a thing that has happened frequently, but, then, so have Obi-Wan and Anakin, I suppose. There really is a lot of getting captured and having to escape or be rescued! Mostly, that's not an issue.

Of course, Obi-Wan is going to mount a rescue operation, but he gets interrupted by being attacked by Grievous. It doesn't go well.

Which leaves the younglings on their own to figure out what to do about being left on a ship that has been damaged and with no supervision other than R2-D2. They do what all kids do -- or, at least, all kids in popular fiction -- they take matters into their own hands.
And join a circus.
Yeah, you'll just have to watch it to understand what that means.

Hondo's still around, because he's the one holding Ahsoka, expecting to make a profit of off her. From whom is a bit of a mystery since, when Ahsoka tells him he can't ransom her to the Separatists, he says he knows because, "Don't ask me why, but Dooku holds such a grudge against me since our little I-held-him-hostage affair." It's a great moment in an episode which is a bit anticlimactic after the previous one.