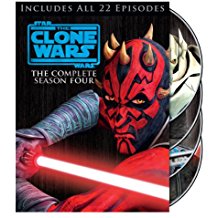 So... Here we are at the end of season four of The Clone Wars. When the Squid and I started this "little" venture back in -- oh, man, that has been a while ago, now! -- sometime ago, I didn't remember the specific low points of the series. Well, if the series has a low point, season four is definitely it. At least, the beginning of season four, at any rate.

Well, you can go back and look at the individual reviews if you want on the beginning of the season, no need to pick at the scabs, right?

Season four doesn't really get going until episode seven, "Darkness on Umbara." I think the Umbaran arc and the introduction of General Krell is the high point of the season. It's too bad that Krell had to die; he was a great villain. But that story line left some threads lying around that I'm pretty sure we go back to in season five. Or, maybe, six. I don't remember.

Of course, the big reveal of the season is that Darth Maul survived being bisected in The Phantom Menace and, now that he's back, he's out for revenge against Obi-Wan. As I said in my review of "Brothers," I'm still ambivalent about the resurrection of Maul. I think I'm a bit more negative about it, right now, than I was after I finished watching the Maul arc, though, which doesn't conclude at the end of season four. Yes, mostly because I can't remember what happens. What I do remember is being somewhat reconciled to the whole thing after watching the story. Something akin to, "Well, it was dumb to bring him back but, in the end, worth it." I guess I will let you know for sure when we get there.

Possibly, the most significant even of the season, though, is arc in which Obi-Wan goes undercover as Rako Hardeen by faking his own death... without telling Anakin. In the grander scheme of things, I think it's important to show the cracks in Anakin's "faith" so that his fall from grace is more... not really believable... has more context. It's always annoyed me when people talk about how sudden and abrupt Anakin's fall is in Revenge of the Sith. First, a "fall" is always sudden and abrupt, because things are always okay right up until they aren't. But, also, it's not like you can't see it, even just in the movies. The seeds of Anakin's fall are apparent all the way back to Phantom Menace. It's nice to have these Clone Wars stories, though, where we see the development of what will become Anakin's break with the Jedi.

So, yeah, even with season four being the low point of the series, there are still some good arcs in it and what I would call essential viewing.
Posted by Andrew Leon at 12:00 AM