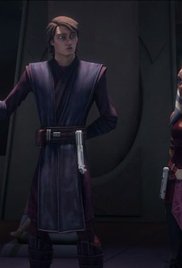 -- Fear is a malleable weapon.

Season five starts with a... newly found special significance, the introduction of Saw Gerrera. Saw started his opposition against the Empire while it was still the Separatist movement, and we get to see those origins in this episode.

This is also a very relevant political episode, a social commentary on terrorism and how governments can, perhaps even, inadvertently create terrorist organizations. I think nearly all modern terrorists groups in the Middle East can be traced back to the 80s and the politics of Reagan. Sure, it was to "stop the spread of communism," but we gave them weapons; we trained them, look where that took us.

The idea to equip groups and offer training to them is, of course, Anakin's. He calls this supporting rebel cells. Some other Jedi, notably Obi-Wan and Yoda, worry about the creation of terrorist groups. I think we can see the seeds of the Rebellion being planted here, certainly where it pertains to Saw Gerrara. This should be an interesting arc...

The episode is not without personal conflict as well. Ahsoka has to deal with feelings of jealousy as she watches a burgeoning relationship between Steela Gerrera (Saw's sister) and Lux Bonteri, who also shows up in this episode. Oh, that Lux, always popping up in the strangest places!

All things considered, this is a much stronger opening episode and story arc than season four had.

"A means to an end, fear cannot be. Stop those who spread terror, the Jedi must."
Posted by Andrew Leon at 12:00 AM