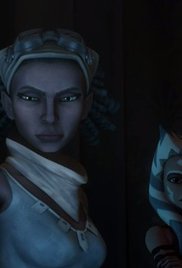 -- Struggles often begin and end with the truth.

Political statements aside, there are times when the logic used for the story, just to make a point, is a little, shall we say, spotty. That being said, this is a good episode, and this is a good arc. If nothing else, it's a solid background for Saw Gerrera and who he becomes.

And, based on his behavior in this episode, it's possible to see how he ended being who he is in Rogue One, that being a man largely made up of machine parts.

The interesting part of this episode for me, right now, and probably not the real thrust of the episode, but, still, is that not choosing is in itself a choice. So... How about some background?

King Dendup needs to make a choice between the Republic and the Separatists, and he knows he needs to make a decision. The problem is that he really just wants to be left alone and doesn't want to take sides. So... he does nothing. To put it another way, he doesn't go vote. Because he chooses to not vote, the Separatists, because they don't respect other people and how those people choose to live, invade his planet, depose him, and put a pretender on his throne. Because, you see, not choosing is actually a choice and, when enough people don't go vote, it most often happens the greatest of evils prevails.

Separatists, Trump, Hitler. It's all the same thing. At least Dendup had the courage to own up to his mistake and say, "This was my fault."
Posted by Andrew Leon at 12:00 AM