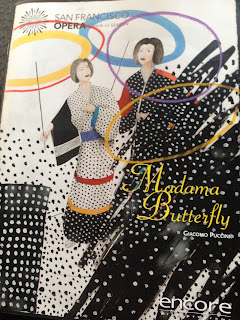 Unfortunately, this will be the last opera review for a while. Performances don't start again until June. However... what an opera to end on!

I'm gonna have to lead with with the fact that the set was crap. It was, in fact, almost non-existent, consisting mostly of concentric circles on the stage and a sliding screen. Granted, you don't really need anything of consequence for Madame Butterfly since it all takes place in the same location, a small Japanese home near a cliff, but I think I would have preferred a bare stage to the circles on the floor, which seemed to have been used for nothing more than to lay out the circular patterns the servants moved in.

Also, the costumes were crap. As with Aida, they brought in an outside artist to do set and costume design, in this case Jun Kaneko. Don't get me wrong, Kaneko's art is definitely interesting -- I especially like his sculpture work -- but his style would have fit more with the movie Dick Tracy -- being largely composed of bright, primary colors done in odd block patterns -- than it did here. The costumes distracted from the performance rather than enhancing it, and that's always a problem.

Aside:
In our opera viewing, I've come to break down the performances into four categories: sets, costumes, visual performance (acting), and vocal performance. As you can see, half of my categories for this opera have already received horrible marks.

That said, this was my wife's favorite opera of the season (so far (since we have three more in JUNE)), and she agrees with me about the set and the costumes (though my wording is probably a bit more harsh than how she would say it). The singing was so amazing, especially from Lianna Haroutounian (Butterfly), though, that it completely overshadowed and made up for the lack of any real set and the gaudy, distracting costumes. I'm going with Don Pasquale as my favorite so far because it gets better overall scores, and, if I was going to watch one over again, that's the one I would choose. Butterfly comes in a close second, though, and, if I was just going to listen to one, I would choose it.

So, yes, Haroutounian was amazing. You could say that her singing in this performance went to 11. Or, maybe better, "to infinity and beyond."

Vincenzo Costanzo was also very good as Pinkerton. He was a believable asshole. I hope it was the acting and not just his personality coming through. I kid! Okay, well, I don't kid; I do hope that, but I'm not trying to imply that I think that... Oh, never mind! He was great in his role.

And I really enjoyed Julius Ahn as Goro.

As a contrast to what I was talking about in my review of Aida, I want to point out that Butterfly had a very diverse cast. It was good.

This production of Madame Butterfly, even with the set and costume issues, was well worth seeing. I sort of feel like I should talk some about Puccini because he's a very interesting character himself, but it really doesn't have anything to do with this production. Anyway, his opera is powerful, and I appreciate the symbolism of the long musical interlude even if it is difficult to sit through. And, see, that's the thing: this production had a lot of what I would consider to be serious issues, and it was still amazing.
Posted by Andrew Leon at 12:00 AM