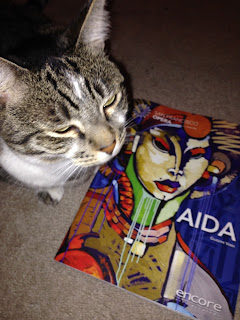 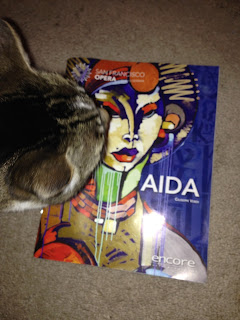 No, the cat is not part of the review, but the cat insisted on being in the photos. Every single one of them. He just followed me around and sat on or next to the book every time I tried to frame the cover in the picture. Maybe he's trying to tell me something about Aida? Or wants to read the program? Or just likes the pretty picture? I guess we'll never know.

So what was the problem?

It was too slow.

I don't mean there wasn't enough "action" in the traditional sense of "action," but this opera had a lot (a lot!) of that standing in place and singing thing that removes any potential action from a scene. Even to the point where one guy, Radames, the Egyptian general, is singing about how much he wants to be made commander of the forces while all of the other soldiers are just standing still watching him. Seriously, no one was moving. And it just went on and on like that. If the soldiers had been doing stuff in the background, like they were working or something, while he was singing, it would have added some life into something that was about as entertaining as watching someone take a nap.

The other thing of note about this production is that the set was... disappointing. They made a big deal about working with Los Angeles artist Retna on the set design (he did the art for the cover of the program book in the picture above), and the art was cool and interesting, but, other than the art pieces worked into the set, the set was rather bare. It was very minimalist, so not even the set added interest to the performance.

The other thing that bothered me is something that may not be fair; I actually don't know enough about opera and the opera world to know. The setting of Aida is during a war between Egypt and Ethiopia, yet the cast was nearly all white. It's possible that there may not be any way around that as far as the primary cast goes; opera tends to be pretty white. However, it seems to me that they could have done something more diverse with the chorus characters and the few dancers. It would have been nice to have a something that looked like representative of a war between Egypt and Ethiopia. But, again, I don't know enough to say that definitively, and it's not like there is a tradition of Aida being performed any other way (despite the fact that it was commissioned for the opening of the Cairo opera house in 1870(ish)).

Still, and I sort of hate to always go back to this, it was better than last year's Usher House. At this point, I'm pretty okay with any opera I'm seeing as long as it's better than that.
Posted by Andrew Leon at 12:00 AM