Zealot: The Life and Times of Jesus of Nazareth (a book review post) 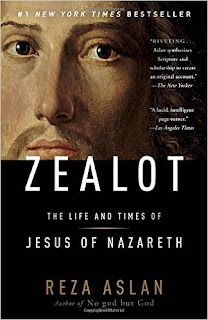 To put it mildly, I am not overly fond of "Christianity" right now. To be clear, when I say "Christianity," I do not mean Christianity; I mean the modern farce that people pretend is Christianity, whatever that actually is. Because it's clear that there has been a division about what is or is not Christianity right from the very beginning.

Which has nothing to do with what "Christianity" is, and has been for the last several decades at least, in America today. "Christianity" is a religion of hate, exclusion, and fundamentalism; the religion that supported a man to the Presidency who is completely antithetical to everything Christianity represents. Or says it represents.

And, no, the book has nothing to do with modern politics, but it does deal heavily with how different a thing can be from the actuality, the truth, that it was based on.

I think the audience for a book like this is probably fairly small, and not because it's not good. It is. It's well written, well researched, and well supported. However, "Christians" will dismiss the book as, I'll just say, liberal propaganda, which is sad, because it's "Christians" who need this book more than anyone. "Christians" need to be challenged to think beyond the shallow tripe they are spoon fed on Sunday mornings. Of course, being a book ostensibly about Jesus, there's no reason non-Christians should have any interest in the book... unless it's someone just curious about the history.

I'm not going to go into detail about the book -- you can read the blurb from the book for yourself -- however, I'll touch on one part:
The latter part of the book deals with a division within the early church between James (the leader of the church in Jerusalem) and Paul, who was one step removed from being a heretic. Much of our modern church, modern "Christianity" is built around what Paul wrote, a man who never met Jesus, yet claimed to speak with greater authority about him than Jesus' own brother (the aforementioned James) and the rest of the apostles. The piece that history loses is that in his day Paul was an outlier, someone trying to peel off members from the main body of the early church with heretical teachings and who stayed in conflict with James for much of his ministry.

In fact, Paul was losing. And bitter.

Probably, we would know nothing of Paul today had not two things happened:
1. James was assassinated.
2. The Romans leveled Jerusalem, the side effect of which was destroying the central power structure of the early Church.
Basically, this allowed the Church to become a more gentile-centric organization than it would have been if it had remained centered in Jerusalem. It allowed the New Testament to become a book of Paul's teachings rather than a book of Jesus' teachings, and the current "Christian" church relies much more heavily on Paul than it does Jesus. Not that the representation of Jesus is completely accurate.

Anyway...
As a Truth seeker, I found the book fascinating and would highly recommend it.
Posted by Andrew Leon at 12:00 AM