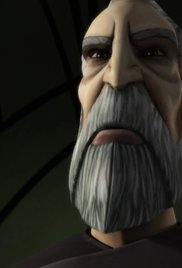 -- The strong survive; the noble overcome.

Okay, so, the ship they come in on at the beginning of the episode is pretty sweet. I don't remember seeing it in the last episode -- I don't know if I missed it (I get interrupted a lot by child-things) or if they only talked about it, but it's cool -- but it was a cool ship to open with.

Beyond that, though, I'm ambivalent about this episode. On the one hand, we're introduced to a dozen or so new bounty hunters (and there's a great bit dealing with Cad Bane and his hat fetish), and some of them look really cool. However, they are mostly window dressing, and we don't really get to find out any more about them than how they look. Then, again, I suppose that's how the bounty hunters were introduced in The Empire Strikes Back. Other than Boba Fett, it was years and years before we found out anything else about them.

Oh, and don't worry; I'm not forgetting the other hand.

On the other hand, this is one of those video game-like episodes where the bounty hunters are put in "the box," and they have to survive a series of challenges to earn the privilege of being on the team to capture Palpatine. I'm bored of these kinds of episodes, especially in a twenty minute format. It's just a ridiculous idea that has been perpetuated in popular culture through video games, but it makes no sense as something real. Everyone would die, so you wouldn't have any winners from which to form your team.

But Bane and Hardeen seem to bond, which is an interesting development.

Basically, this episode is just a bridge between parts two and four of this arc, but it would have worked just as well for me (okay, actually better) for them to just have introduced the rest of the team of bounty hunters with a "here's the rest of your team."
Posted by Andrew Leon at 12:00 AM