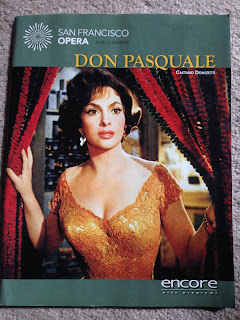 Don Pasquale marks the second opera by Donizetti that I've seen, the first being Lucia di Lammermoor, which was actually the first opera I saw. [Okay, not the first opera I've ever seen, but the first one since my wife and I started going to the opera.] So, if you look back at my review of Lammermoor (click the link), you will see that I was not blown away by it; however, Lammermoor is generally considered Donizetti's best opera, or, at least, it is his most performed. This is just going to highlight the difference the production can make, because Don Pasquale was incredible. Of course, Pasquale is a comedy, and I think I'm probably partial to them. So far, I have not seen one that I didn't like.

So, yes, I laughed a lot. So did my wife. I have to say, even with subtitles, it speaks a lot to the quality of the presentation that I can spend so much time laughing at something being performed in Italian. But, then, the story is just funny, about an elderly man who decides to take a very young bride in order to teach his nephew a lesson. And I'm going to mostly leave it at that other than to say that there is a reversal of the plot as there is an endeavor to teach Don Pasquale, the elderly man, a lesson in return.

As with most of the productions at SFO (San Francisco Opera), the set was amazing. They made it part of the representation of the story, a metaphor, if you will, of a portion of what was happening, and it was pretty brilliant. Mostly, it was brilliant because it allowed for a lot of physical comedy, which brings us to the actors.

Ernesto, the layabout nephew, was played by Lawrence Brownlee, who made his SFO debut in Don Pasquale. Not only was he a fantastic singer, but he provided some great physical comedy as well, everything from trying to carry too many suitcases when his uncle kicked him out of the house to trying to get through an upside down doorway (no, I'm not explaining that). He wore his expressiveness in his whole body, not just his face, and he was rarely still when he was on stage, meaning he did none of that standing and singing that can really drag an opera down.

Lucas Meachem, who played Figaro in the presentation of The Barber of Seville we saw last year, returned to SFO as Dr. Malatesta. He was just as good in this one as he was in Barber. I'm going to go out on a limb, here, and say that I would happily see anything that Meachem is in. Wait, does this mean I'm developing favorite opera performers, kind of like saying "I'll watch anything with Harrison Ford in it." I think that's what it means!

Not to be left out, the other two primary performers, Maurizio Muraro as Pasquale and Heidi Stober as Norina, were also really great. Stober had just the right amount and kind of attitude to pull off her role realistically, and it was difficult not to watch Muraro throughout the entire performance, because he was always doing something, even when he wasn't the one singing. If you weren't watching him, you were missing something funny going on.

My first thought about Pasquale when it was over was to think that my younger son (the one who recently finished high school at 15) would have really loved it. He's never seen an opera, but I think he would have appreciated the humor of the story, and he's a facile enough reader that I don't think the subtitles would have hindered him. I tell you that because I would like to be able to recommend a DVD performance for anyone who is interested but, alas, upon a bit of research, unless you want to buy it, it doesn't seem as if there are any you can rent or stream. At least not from the normal places. Oh, well. I can only speak for the SFO presentation, anyway, and that one isn't available unless you came to see it. Which you certainly should have!
Posted by Andrew Leon at 12:00 AM