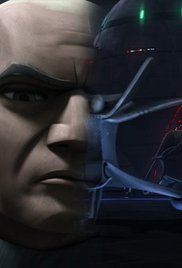 The conflict around General Krell and whether to obey his orders immediately and without thought or not continues to drive a wedge into Anakin's regiment. Which may not matter considering Krell seems to be doing his best to maker sure that Anakin has no regiment to return to.

There are the soldiers like Dogma (great symbolic name) who just want to do as they're told no matter what the consequences. Don't question, just obey.

There are soldiers like Fives who want to know the reasons and want to believe they can trust their commanders to do what's right by them. Fives, where Krell is concerned, is on the side of disobedience.

Which leaves the ones stuck in the middle. Those like Hardcase (and maybe only Hardcase) who don't believe in Krell but also don't mind following his orders if it means more fighting.
And those like Rex...

Rex believes in his mind that Fives is correct and that Krell is throwing them away carelessly, but he, in his heart, believes in the system and can't bring himself to go against it. He has decided that if Krell is doing what he's doing then there must be a reason, some reason ha can't understand, so he will follow the orders even if it's the death of him.

This is a great arc so far. Lots of great philosophical issues evenly meshed with a lot of great action. It's even an arc you can watch without needing a lot of backstory, so it's a good place to step into the series.