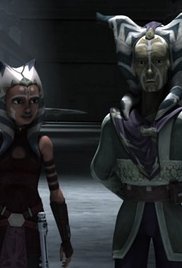 Things didn't end well for the Jedi in the last episode. Anakin has been taken by Queen Miraj to be her personal slave while Obi-Wan and Rex have been sent to the Kadavo slave camps. If it was just Obi-Wan, it wouldn't be a big deal, but the commander of the camps has threatened to kill people of the Togruta anytime Obi-Wan disobeys. He does just that to about half a dozen of them to prove the seriousness of the situation.

Basically, then, the whole episode is a prison break type story but they have to rescue an entire population. With the complication of Dooku trying to have them all killed.

It's a good arc, and this is an exciting and interesting episode to wrap it up.

But I want to focus on what was probably sort of a throwaway line in the show or, at least, not meant to carry the kind of weight I'm going to give it.

One of the Togruta is punished for something innocuous Obi-Wan has done. It was totally arbitrary on the part of the slaver and completely because he wanted to punish Obi-Wan and prove that he had more power. After the incident, the Togruta slave blames Obi-Wan saying, "Keep away from me. Jedi only make things worse." It seems to me this is the Separatist line that people in the galaxy are buying into during the war: Jedi only make things worse.

It reminds me a lot of our current political turmoil. The abusers spin out lies about who is at fault as they continue to heap on the abuse. It's rather like the abusive husband blaming the wife as he abuses the child. Or, you know, blaming the Mexicans for the loss of jobs while you have your own products produced in China.