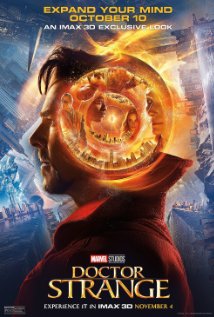 Doctor Strange has always been one of those characters who has worked better in concept than in execution. I mean, he's a sorcerer, but he's also a super hero. No, no, he's a super hero who has magic as his super power. In the comics, his powers are actually very limited. He has just these few things that he does and a few tools that he uses, and they are always the same. Very clearly defined, like Captain America and his shield. It's more about using those things in clever ways than it is about actually using magic to cast spells to accomplish different goals.

But, then, Marvel is a universe where magic is really science, everything having to do with multiple dimensions and other planes of existence. And, really, I'm fine with that even if, with the comic, I always wanted Dr. Strange to be more... I don't know... complex. To actually be more mystical for one who is called Master of the Mystic Arts.

All of that to say that I was hoping for a little more magic in the movie, especially with the whole thing in the trailer about how the Avengers protect from physical threats while the sorcerers protect the world from mystical threats. And I suppose that's true, though it's all in where you draw the lines in the definitions, and the "mystical" threats were not all that far removed from what we've seen in Thor and the Avengers.

But I can't complain, because, really, it was an excellent adaptation of the comic, capturing all of the essential elements. Capturing them and blending them seamlessly with what Marvel has already set in motion leading towards the next two Avengers films. It only left out things that didn't ever exist within the comic to begin with, and I can't fault it for that because, then, it would have been a bad adaptation, not something that Marvel is known for up to this point (unlike some other comic book company).

I'm going to get all spoilery now, so, if you haven't seen it but plan to, you should just know that I really liked it and quit reading right now.

Things I loved about the movie:

Benedict Cumberbatch: As Marvel has done so well, the casting here was perfect. There's not anyone else who can play an arrogant genius bastard quite like Cumberbatch. It was such a good job that well before the car crash my son was squirming in his seat and muttering about what a jerk Strange was. It was rather like, "This is the guy who's the hero?" And, well, yes, that was the point in the comic, too, and they did a great job of breaking the character down and rebuilding him as someone better and not so self-obsessed.

Tilda Swinton: Despite her controversial casting in the role of the Ancient One, I thought she was great. In fact, I think she rose above the role they wrote for her, the role they wrote for her being that of a woman. She chose to bring an androgynous quality to the part that fit it well. The way she played it, she was rather like a prototype human, sexless and ageless. I think the film would have been even stronger if they had severed the ties to the idea that she was a woman and left the character more... ambiguous. Either way, she was great in the role.

the Eye of Agamotto: Yes, I think it's great that the Eye has been included in the movie, but there was kind of no doubt that it would be considering it has been a part of the Strange mythos since Strange's first appearance. What I love about it is that they have made it one of the infinity stones.

the Cloak of Levitation: 'Nuff said.

Chiwetel Ejiofor: Okay, this is more about the character than the actor, although I think Ejiofor is quite good. However, what I enjoyed was what they have done with the character. While not being quite true to the origins of the character in the comics, I like that they have begun the journey of Mordo as a brother-in-arms to Strange. It should make what comes later more interesting.

Benedict Wong: Benedict Wong is great, and I love that they have fleshed out what was basically a stereotype Asian servant from the comic. And maybe they've fleshed out the character in the comic at this point, too, but, back in when I was still reading comics, Wong was your basic manservant to Strange, so I like that they have made the character something more than that, and Benedict is very good in the role.

Things I didn't love in the movie:

The sling rings: I'm not crazy about the idea of needing the rings to open portals. Maybe if they had stated they were a good tool to speed up the process or to help students learn to open the portals or something like that, but, making them a required tool, raises too many questions and turns them into nothing more than a plot device by the writers to trap people at will by having them lose their rings.

The eye makeup of the zealots: Sure, from a distance, the eyes of the zealots looked cool and like their faces were cracking apart. However, when they did closeups, the green and the purple was shiny or glittery, which made them look more like rock 'n' roll musicians from the late 70s. It took all the menace away.

Actually, there are many more things I loved in the movie that I didn't mention, things like the death scene of the Ancient One and the astral fight that Strange had while he was being operated on, but I could go on for a while if I tried to list all of the things. Needless to say, I think Doctor Strange is a great addition to the Marvel Cinematic Universe, and I am very much looking forward to the character appearing in the next Thor movie and the Avengers movies as well as the next Strange movie. And Wong, too.
Posted by Andrew Leon at 12:00 AM