-- A secret shared is a trust formed.

You can blame it on Boba Fett. Or, more specifically, whoever it was who decided that Boba Fett should be released as a secret character action figure ahead of the release of The Empire Strikes Back. Between that and the actual bounty hunters in the movie, bounty hunters became a mythos of the Star Wars universe without doing much more than standing in place and being told, "No disintegrations."

With that in mind, it's somewhat surprising that they waited until the last episode of season one to introduce bounty hunters to The Clone Wars. However, they did it by introducing a whole team of bounty hunters, including Aurra Sing (of The Phantom Menace fame). But it's Cad Bane who runs the show, and a very interesting character he is. 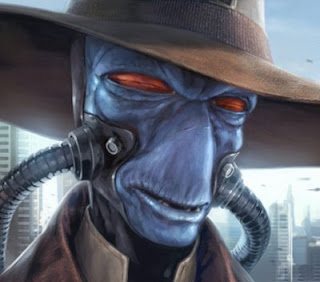 And I'm not really going to talk about that other than to say that he's an ongoing character and, possibly, one acting outside of Palpatine's machinations.

This episode has a hint of Ocean's Eleven flavoring. It's not a heist, per se, but each of the bounty hunters definitely has a specific role in the plan that Bane is hatching.

Still, with all of the bounty hunter action that's happening, the true story revolves around Anakin and Padme and the stupid things that people can do for love. Specifically, you guessed it, Anakin. It's another step on the path of Anakin's downfall for him, though it might not appear that way, but it's an obvious thing that Anakin does not hold his Jedi code in the place that he should.

All in all, this is a pretty good episode. I think it would have been more enjoyable as a two-parter, especially if they had done an end-of-season cliff hanger but, maybe, that's not a thing in shows primarily targeted to younger people do. I don't know. It's a fun episode as it is, but it could have been a bit more. Of course, season one Clone Wars doesn't have any actual multi-part episodes, so that's probably part of why it's contained as a single episode.
Posted by Andrew Leon at 12:00 AM