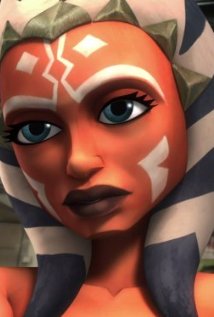 -- It is a rough road that leads to the heights of greatness.

This is the kind of episode that makes me love this series.

Anakin is tasked with breaking a blockade around the planet Ryloth so that Obi-Wan can get through with ground troops so that they can liberate the Twi'lek population from the Separatists who are, actually, treating the Twi'leks pretty poorly (but that's next episode). Part of his plan includes giving Ahsoka her first command. Which would be great...

Except that it's a trap!

Yes, the Separatists set up a trap for the Republic forces, and Ahsoka's fighter squadron gets... well... pretty shot up.

The issue here is that it's her fault. When called back because it's a trap, she disobeys orders because she believes she can still complete her mission. Because she doesn't return and the fleet has to wait for her, they lose an entire cruiser and get pretty beat up themselves.

There are a lot of things in this episode that make it worth watching and that I could talk about, but I'm just going to pick one, the one I find most compelling. Ahsoka disobeys Anakin's orders because, basically, that's what he's taught her to do through his own actions. At the point when Anakin tells her to turn back, she persists because that's what Anakin would do. But she fails where Anakin so often succeeds, and there are devastating results.

Ahsoka doesn't understand why she failed and is crushed that she cost so many clones their lives. The admiral is also wounded during the attack (there's a touching scene where she visits him while he's unconscious and apologizes to him). During the moment when Anakin confronts Ahsoka about her disobedience, she actually tells him that he does the same kind of thing all the time.

Now, what you'd expect is that Anakin would make some kind of excuse as to why it's okay for him to behave in that manner, because that's what you'd get from most shows. But that's not what happens. Anakin just owns it and tells her that she's right. He doesn't apologize for it, either. It's actually a very mature handling of the situation in which he tells her that she needs to learn when to follow orders, because she won't always be able to see the bigger picture. In essence, this is mature parenting, which is rather what having a Padawan is like.

This is a great episode and I would highly recommend it.

"Did you train her not to follow orders?"
Posted by Andrew Leon at 12:00 AM